The Flash “Enhancing the administrative capacity of government entities” (in Italian) analyses the changes contained in Decree Law 80/2021, ratified with Law 113/2021 and partially amended by Decree Law 152/2021. The legislation contains measures aimed at “enhancing the administrative capacity of government entities necessary for the implementation of the NRRP and efficiency in the justice system”. The measures are divided into several levels and seek to address new needs connected with the National Recovery and Resilience Plan (NRRP) and, at the same time, some of the critical issues that have characterised government entities for some time. More specifically, for personnel assigned to implement the interventions envisaged in the NRRP, the measures envisage new methods in recruitment procedures and the possibility of derogating from certain contractual limits provided for in current legislation. At the same time, the legislation provides for an increase – mainly linked to the NRRP – in staffing levels and, finally, the revision of some aspects of the public employment system (including access by competition to the first level of executive positions and the establishment of a new intermediate functional area between officers and executives).

In summary, a major effort is being made to strengthen the technical capabilities of government entities. These have been significantly eroded if not entirely lost in recent decades as entities have turned to private sector consultants to perform functions such as the design and the technical and economic evaluation of investments. However, the shortage of time is forcing a simplification of selection procedures that is not without risks associated with the quality of the personnel that will be recruited. Over a longer time horizon, the strengthening of the technical units of government entities will greatly depend on the manner in which the fourth functional category of public employees created with this legislation is implemented.

Overall, new hires will number 27,568, mainly on fixed-term employment contracts (only 4.5 per cent are permanent). About 90 per cent of hires will be in central government, many of these coming in the Ministry of Justice to expand the Trial Office. The remainder will be assigned to local authorities: 3,367 personnel, divided between professionals and experts, the winners of the Southern Cohesion competition and municipal and provincial administrative officers (Figure 1). 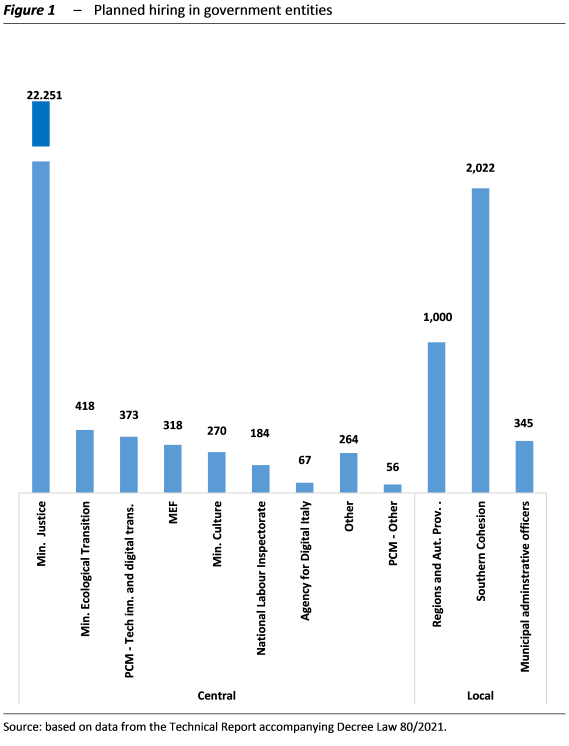 The new hires are entering a work environment in which only 30 per cent of the employees of central and local government entities are university graduates, while 20 per cent have only a compulsory school qualification. New hires will be distributed between the different areas and have specific qualifications. Among all hires other than those going to the Ministry of Justice, about two-thirds are officers (a category that requires a university degree), while the remainder are divided between professionals, experts and executives. Only 1 per cent are assistants (Area II, for which a secondary school diploma is required).

With regard to professional qualifications, on the basis of the competitions being carried out, the most requested candidates are technical staff (40 per cent) – with skills in technical support and design, the execution and realisation of public works and projects (as required in the Southern Cohesion competition) – and those with economic qualifications (33 per cent).

The selection procedures (digital and decentralised) are generally simplified. In addition to the evaluation of qualifications, they envisage an electronic written test and an oral examination. A new selection procedure is envisaged for the recruitment of local authority personnel, where broad discretion seems to emerge, especially in the case of executive roles, for which current legislation provides for more rigorous forms of qualification verification.

A number of provisions addressing a variety of areas are targeted at the professional development of personnel. The changes introduced with Decree Law 80/2021 affect both the first and second executive levels and the non-executive level. In particular, selection is carried out through competitions (and not on the basis of current simplified procedures) for the first executive level, and an additional functional area has been established, the specification of which will be implemented through collective bargaining. The new area encompasses highly qualified personnel, in an intermediate position between the current grades of officer and executive. This is an important innovation that should improve the attractiveness of public employment for people with specialised technical skills in the professional fields in which the skills of government employees are currently most inadequate. A revision of professional areas is envisaged for the remainder of personnel, which will also be accomplished through the collective bargaining system.

Finally, criteria have been defined for career progression, both within the same area and between different areas, and correspondence tables for the categorisation of staff already in service between the new and the old system (granting exceptions to the qualification requirements that external candidates must meet). It will be important to ensure that a new round of career progressions does not repeat the experience of the years 2001-2004, when in four years more than half of public employees were involved in retraining which then led to promotions.