In recent years, we have witnessed a change in the dynamics and composition of public expenditure that has also involved intermediate consumption, i.e. goods and services that are used in the production process of general government departments. The Focus devotes an in-depth analysis to developments in intermediate consumption over the 1995-2015 period. 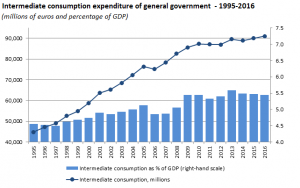 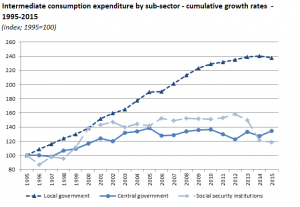 The largest share of intermediate consumption expenditure is accounted for by local government entities (essentially, the regions, provinces, municipalities and local health authorities). That expenditure has risen steadily in the last twenty years, reflecting the increase in healthcare spending, waste management spending and spending associated with the transfer of new functions to regions and municipalities. Since 1995, the spending of local governments has more than doubled (+137.5 per cent), while that of the other two segments has increased by much less (+34.3 and +18.4 per cent, respectively). As a consequence of these developments, local government spending has risen from 62.3 per cent of total spending in 1995 to nearly three-quarters (74.7 per cent) in 2015. By contrast, the share accounted for by central government entities has fallen from 34.1 to 23.1 per cent, as has that – albeit of marginal significance – of social security institutions, which has contracted from 3.6 to 2.2 per cent. 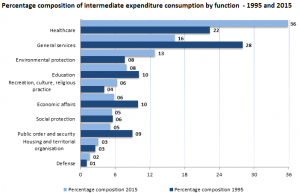 In 2015 expenditure on intermediate consumption for healthcare represented 35.8 per cent of the total (it was 22.3 per cent in 1995). The share of general services fell from 28 per cent in 1995 to 16.2 per cent. The next largest segment is spending on environmental protection, which increased as a proportion of total expenditure from 7.6 to 12.8 per cent, partly reflecting developments in the waste management sector. Intermediate consumption expenditure in the education segment fell from 10.1 per cent of the total in 1995 to 7.9 per cent. 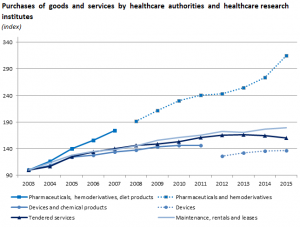 In the healthcare sector, expenditure on goods and services is among the most difficult to control. The increase is primarily linked to the growth in spending on pharmaceuticals and hemoderivatives: the pace of their growth fell below 10 per cent only after 2010, before rising above 15 per cent in 2015. This was partly due to changes in the composition of expenditure categories, as in regional health services the purchasing of pharmaceuticals through normal pharmacy distribution financed by the NHS (which is included under purchases from market producers) has gradually been replaced by direct purchasing through health system structures or under specific agreements with pharmacies, thereby obtaining substantial discounts. Expenditure has also been driven by the introduction of innovative pharmaceuticals, especially in 2015 with the introduction of products for treating hepatitis C. Under the category of services, those put out for tender and the segment of maintenance, rentals and leases expanded by about 45 per cent between 2003 and 2007, before slowing; expenditure on tendered services stabilised in 2013 and then contracted in the last two years.

The slowdown in expenditure on intermediate consumption as from 2009 reflects a range of measures that have had a more incisive impact than in the past, even though they have not been as fully effective as hoped. These corrective measures have been impacted by the intensity and urgency of the consolidation process under way since 2011 in connection with the sovereign debt crisis. To control expenditure in the future, there appears to be scope for containing purchase prices and, above all, gradually eliminating across-the-board cuts by identifying the requirements of individual government departments more accurately.