The impact of the pandemic on hospital finances

This Focus Paper (in Italian) examines the outlook for the main public finance aggregates, basing the analysis on the current legislation scenario presented by the Government in the Update to the 2022 Economic and Financial Document (the Update) and subsequently confirmed in the Draft Budgetary Plan (DBP) submitted to the European Union. Both documents will be updated by the new Government with the presentation of the policy scenario prior to the preparation of the Budget Act.

The first section illustrates the current legislation scenario for the general government revenue and expenditure account. The second section examines the trend evolution of the public debt and highlights Italy’s funding needs, including in light of the Eurosystem’s public debt purchase programme. Finally, the third section contains a preliminary assessment of the consistency of fiscal policy with EU recommendations.

According to the Update and the DBP, the budget deficit is expected to fall to 5.1 per cent of GDP in 2022 (from 7.2 per cent in 2021), fall further in 2023, rise slightly in 2024 and then decrease again in 2025. The primary deficit (i.e. the budget balance excluding interest expenditure) would contract as a proportion of GDP again in 2022 (to 1.1 per cent, from 3.7 per cent in 2021), before returning to surplus as early as next year, two years ahead of the forecast in the Economic and Financial Document (EFD).

After increasing in 2022 (from 3.6 per cent of GDP in 2021 to 4.0 per cent this year), interest expenditure is projected to remain broadly stable at a slightly lower level in subsequent years, although it would be about 1 point of GDP higher than forecast in the EFD. 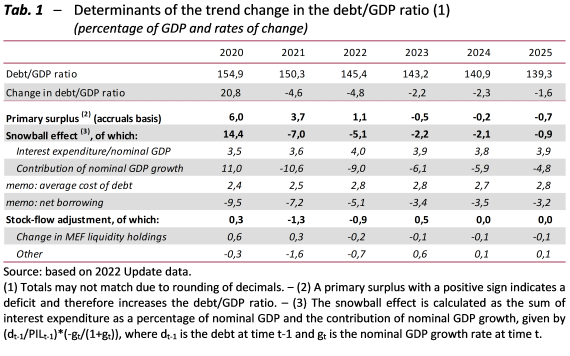 In 2025, the final year of the forecast, the deficit is greater than 3 per cent of GDP and the debt/GDP ratio is more than five percentage points of GDP higher than the pre-pandemic ratio registered in 2019. While the debt reduction path appears more favourable than that envisaged in previous planning documents – thanks in part to the early return to a primary surplus in 2023 – it should be emphasised that this is a trend forecast on a current legislation basis, which therefore does not incorporate a number of factors that could cause the accounts to deteriorate. These include factors connected with unchanged policies, which usually regard public employment contract renewals, the refinancing of international missions and other non-deferrable expenditure. A second group includes the potential requirements connected with measures to support households and firms in meeting higher energy costs or to achieve other economic policy objectives.

Consequently, the room for manoeuvre available to ensure achievement of economic policy objectives and continue reducing the public debt in both the short and long term must be assessed with care.

The public finance scenario is affected by the new financial profile of the NGEU instrument. In the Update, the expenditure incurred in 2020-2021 and that estimated for 2022 is lower overall than that envisaged in the April EFD. The succession of planning documents has therefore seen a rescheduling of expenditure linked to the NRRP. Growth forecasts are based on expectations of a significant expansionary contribution from fiscal policy through full compliance with the timetable for the implementation of the infrastructure measures envisaged in the NRRP. It is necessary to ensure that the expenditure profile of the NRRP will not be disregarded, which would have an impact on the economic growth path set out in the Update. Accordingly, achieving the expected growth in investment in 2023 (+33.8 per cent) will require an extraordinary effort by all the entities involved in implementation.

Finally, preliminary estimates of the indicators used by the EU for fiscal surveillance and the assessment of the fiscal stance suggest that net nationally financed primary current expenditure expanded significantly in 2022, whereas EU recommendations had invited a limitation of such spending. Nevertheless, a significant portion of this current expenditure would be connected with measures to control energy prices, which the EU has stated that it wishes to take into account (albeit with reference to 2023). For 2023, developments in the same expenditure aggregate would appear to provide a more restrictive contribution to budgetary policy, being well in line with the recommendations. However, the consistency of next year’s fiscal stance with EU recommendations will have to be re-evaluated in light of the policy profile of the public finances and the budget measures for 2023.

The forecast for issues of government securities net of redemptions and net of Eurosystem secondary-market purchases would be zero in 2022 (while last year the estimate was a negative €51 billion) and about €42 billion in 2023, a positive figure but still lower than that estimated in 2019.