Equalisation of key municipal functions: the case of childcare services

The >Focus Paper (in Italian) “Equalisation of key municipal functions: the case of childcare services” examines the problems associated with the implementation of the reform of fiscal federalism. Regardless of its relatively small financial impact, the childcare function and the disparities in the delivery of this service are a significant example of the adverse effects of the failure to specify minimum service standards (MSSs), or criteria for standardising the services to be used in the absence of the MSSs. This is a failure that has contributed to deviating the implementation of the fiscal decentralisation of municipalities from the original design.

The differences in the provision of childcare services between the various areas of the country involves many aspects: the level of coverage of the service offered (the share of children served varies from 7 per cent in Campania to 34 per cent in Emilia Romagna, considering private childcare centres as well; Figure 1); the amount of public funding allocated to the different municipalities (which is partly based on the number of children served, thus rewarding those with a higher level of coverage); the use of the childcare allowance by families (which is also proportional to the degree of coverage of the service, with the number of users and benefit amounts lower on average in Southern Italy). 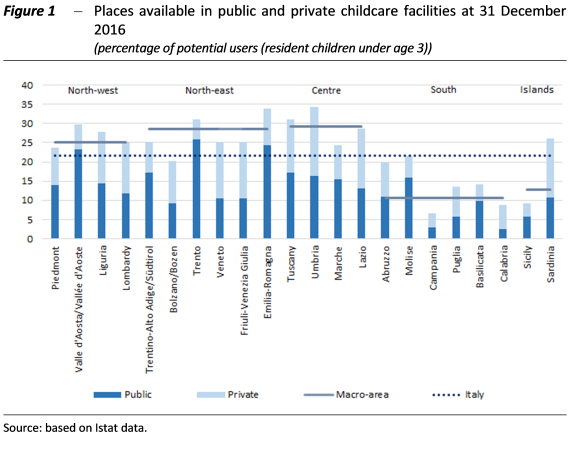 With no specification of the MSSs, the calculation of the standard needs indicators used to allocate the equalisation transfers to the municipalities was based on the levels of services actually provided. The result was to consolidate, rather than reduce, the gaps described, allocating financial resources to municipalities in a manner substantially proportional to the current level of expenditure. This produced great variability from municipality to municipality in the requirements assigned, which largely reflects historical differences in the degree of coverage of childcare services for resident children under the age of 3, sharply penalising the South (Figure 2 ). 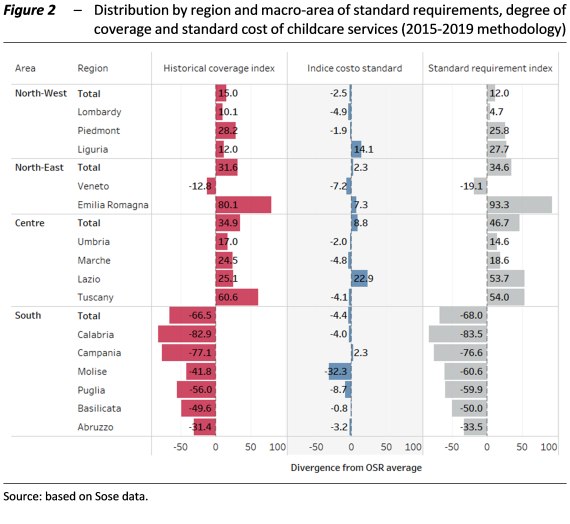 In an attempt to correct this method for determining equalisation transfers, in July 2019 the Technical Commission for Standard Needs Indicators introduced a revised version of the standard needs indicators calculation system for childcare services, which will be initially adopted for the distribution of the equalisation fund for 2020. It provides for a minimum coverage level whose cost is based on a voucher that varies in amount between municipalities, but is in any case lower than the average standard cost of the service delivered either directly or through accredited providers. This minimum benefit is financed by reducing the funding transferred to municipalities that provide high service levels. In terms of redistribution, 4,558 municipalities will be better off and 553 will be penalised (Table 1): for the former, the average standard requirement rises from €206 to €321 per resident child, which is still much lower than the overall average (€1,150 per resident child); for the latter, the average standard requirement declines from €2,779 per resident child to €2,273, remaining well above the average. However, the municipal equalisation mechanism only compensates for part of the greater/reduced standard requirement. In particular, the municipalities benefitting from the new system will receive an additional €19 per resident child in 2020 and €69 in 2030 once fully implemented, while the penalised municipalities will lose €83 per resident child in 2020 and €303 in 2030. For 2020 the amount of resources transferred from the penalised municipalities to the beneficiary municipalities is approximately €10 million (as from 2030, the amount will be €35 million). Assuming, in theory, that the recipients of additional resources use them not to provide vouchers but to increase the number of childcare places, those municipalities could offer an additional 1,400 places in 2020 and 5,060 places in 2030, with a corresponding increase in coverage of 0.3 per cent in 2020 and 1 per cent in 2030. 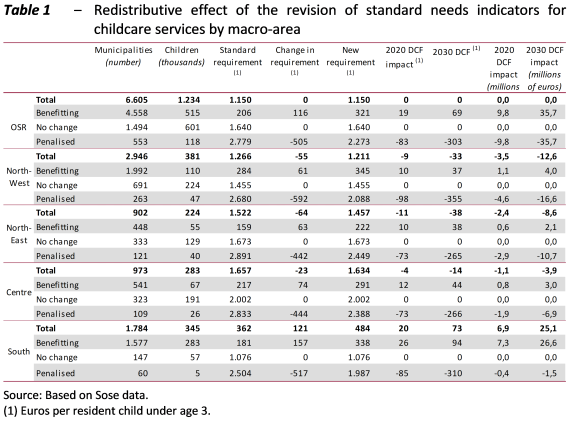 The correction ‑ although significant in terms of principle ‑ produces only a limited increase in the scope of equalisation, one that will therefore not lead to a significant change in the level of service delivered by municipalities, which are, moreover, not subject to restrictions on the allocation of the additional equalisation resources.

Eliminating such large disparities would require either a reduction in the level of the services provided by municipalities that offer higher levels of service, or additional resources (in part to address infrastructure gaps), beginning with those allocated in the 2020 Budget Act. The latter should be transferred to municipalities where the difference between the actual level of service provided and the coverage objective is greatest, while also implementing monitoring of the actual achievement of results.

It is also necessary to ensure adequate coordination between policies to support supply and those supporting demand. In the absence of the former, even allocating additional resources for the purpose of exempting users from the fees for childcare services, as envisaged in the 2020 Budget Bill, risks benefiting only those residing in areas that already provide these services and benefit from the childcare allowance, to the detriment of those residing in municipalities that do not provide such services and who will receive insufficient additional funding to expand the services they offer. Similarly, to support supply, the capital resources allocated to municipalities (€100 million per year for 2021-2023 and €200 million per year from 2024 to 2034), which are appropriated in the 2020 Budget Act for the construction, renovation or safety upgrading of childcare facilities, should most benefit areas where the difference between the actual levels of services and the coverage objectives is greatest.