Italy will only be able to achieve the objectives set with the NRRP for nurseries and preschools under certain conditions. This is the conclusion of this Focus (in Italian), which uses the results of two published public tender rankings to analyse the distribution and allocation of resources for these services and proposes an initial assessment of the likelihood of fulfilling the commitments undertaken by Italy at the European and national level. Achieving essential service levels for early childhood education throughout the country would appear to be a more challenging task than achieving the objectives of the NRRP.

The investment envisaged in the NRRP for nurseries, preschools and early childhood educational and care services amounts to €4.6 billion. Of this total, €3.7 billion have been tendered among local authorities, in addition to €109 million allocated by the Ministry of Education. Following completion of the tenders, the resources allocated to date total €3,480 billion. Accordingly, €329 million have yet to be allocated (Table 1).

The geographical distribution of the allocated resources was driven by two main factors: the allotment criteria adopted in the tenders and the participation of local authorities. The South received 52.1 per cent of the resources, exceeding the minimum territorial constraint provided for in the NRRP (40 per cent). About half of the funding went to Campania (€508.2 million) and Puglia (€357.6 million). Among the regions of the Centre-North, the largest volume of funding went to Lombardy (€351.4 million), Lazio (€214.6 million) and Veneto (€198.2 million) (Figure 1). 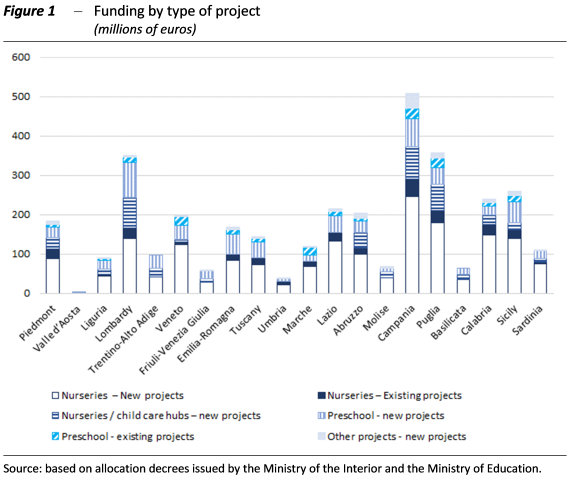 The objectives: building projects and creation of new places

The NRRP investment has two objectives: the first (a milestone) involves the award of contracts for building, renovating and ensuring the safety of nurseries, preschools and early childhood educational and care services by the second quarter of 2023; the second (a target) calls for the creation of 264,480 new places at nurseries and preschools by the end of 2025. Recall that at the national level the 2022 Budget Act established an essential service level (ESL) requiring each municipality or catchment area to provide a number of places (including private services) – equivalent in terms of standard cost to full-time nurseries – equal to 33 per cent of the population aged between 3 and 36 months.

Possible delays in achieving the milestone….

According to PBO-IRPET estimates of the average time required to carry out public works (comprising the three phases of pre-award, award and execution), the average duration of the award phase – which ranges from the publication of tenders/notices to the award of contracts – varies from 6.5 months (197 days) for contracts worth less than €1 million to about 11 months (328 days) for larger projects, with the average duration in the South being about 38 per cent longer than in the Centre-North (258 and 187 days, respectively). On the basis of these estimates and assuming that all projects are already available, achievement of the milestone would probably require the publication of tenders/notices for the award of contracts by the local authorities by the end of 2022. As things stand now, however, the agreements between the Ministry of Education and local authorities necessary for the start of the entire project implementation phase are still being defined and some resources still have to be allocated, delays associated in part with the reopening of the tenders to enable greater local authority participation. The achievement of the milestone therefore appears to depend on shortening the time needed to complete the award phase compared with the historical precedent. In order to do this, it could be helpful to employ the simplified procedures introduced temporarily for projects falling within the scope of the NRRP (Decree Law 76/2020 and Decree Law 77/2021), an approach that should be maintained in the future new Procurement Code.

… should not jeopardise achievement of the target

Limited delays in the achievement of the milestone should not jeopardise the time need to achieve the target, given that the average estimated duration of the execution phase varies from 7.5 months (226 days) for projects of less than €1 million to just under 20 months (590 days) for larger projects.

At the moment, data on the new places that municipalities intend to create are not available, so we can only estimate a range of values achievable with the available resources. If we assume that a) project costs are equal to the average for existing projects, i.e. 70 per cent of the total cost of the work; and b) the creation of a minimum of 7 square metres per child for preschools and the space provided for in regional legislation on childhood educational services for nurseries, the achievable number of places ranges between a minimum of 178,842 and a maximum of 330,088 depending on whether the maximum or minimum cost per square metre provided for in the tender notices is considered (Figure 2).

The resources allocated therefore appear to be consistent – both in the central scenario (average cost per square metre) and in the maximum scenario (minimum cost per square metre) – with achievement of the target, provided that all the funds are allocated and that there is no substantial increase in costs compared with those indicated in the tender notices. Moreover, in 2022 additional funds were appropriated to meet cost increases for the construction of public works (for example, see Article 26 of Decree Law 50/2022). 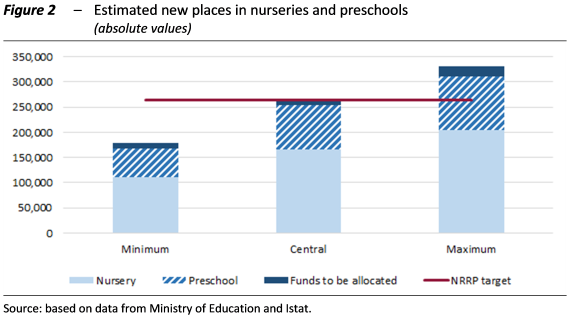 Nurseries and the ESL: national shortfalls and sharp disparity between North and South

In 2019, total coverage (public and private) of nurseries (0-3 years) stood at 26.9 per cent of the eligible population, about six points less than the ESL, but the overall figure masks substantial territorial differences: some regions of the Centre-North and Sardinia achieved levels close to or above the target of 33 per cent, while in the South coverage was close to 15 per cent. The situation differs for preschools (3-6 years), in which 92.2 per cent of the eligible population was enrolled in 2020.

A comparison between the additional places in child-care services necessary to achieve the ESL and the estimated number of places achievable with the resources awarded with the NRRP tenders shows that at the regional level, the actual creation of those places would enable all the regions of the Centre-North to eliminate the gap between places currently available and those needed to achieve the ESL. By contrast, the scenario is more diverse in the southern regions. Some would exceed (Abruzzo, Basilicata, Molise and Sardinia) or achieve (Calabria and Puglia) the ESL, while others (Campania and Sicily) would not be able to make good the shortfall (Figure 3).

However, the regional-level analysis conceals the compensating effect within a region between municipalities that despite having already achieved, and in some cases exceeded, the standard have nevertheless obtained resources for the creation of additional places, compared with those that, while already not providing adequate services, did not participate in the tenders, thus increasing the disparities. 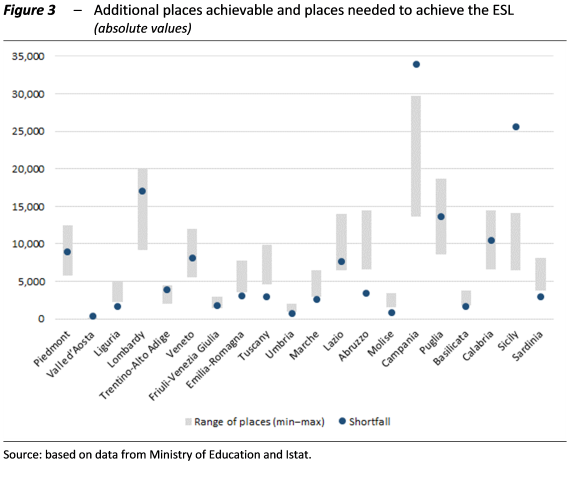 Many municipalities did not participate in NRRP tenders

In view of the significant structural deficiencies present in certain regions, such as Campania, achieving the ESL would require more resources than the admittedly substantial funds already received. In other regions, such as Sicily, local authorities failed to participate.

In general, municipalities showed less interest in the construction of nurseries, the supply of which is more limited, and focused their attention on preschools, which are already widely available and enrol almost all potential users.

Just over 3,400 municipalities with a serious shortage of nurseries places (those with a coverage ratio of between 0 and 11 per cent) did not participate in the NRRP tenders.

In about half of these cases, the decision not to participate could be justified by the fact that the number of children is so small that it does not require the creation of nurseries (with the concomitant risk of creating excess supply with respect to the ESL). This explanation is especially true for mountain municipalities and those located in the internal areas of the major islands, which for geographical reasons often also struggle to work with each other to offer services in aggregate form and therefore have to find alternative solutions.

For the other half of municipalities that did not participate in the tenders – those with a sufficiently large number of children to require the creation of new nurseries– the only alternative to comply with the ESL is to develop forms of collaboration with neighbouring municipalities (Figure 4) . 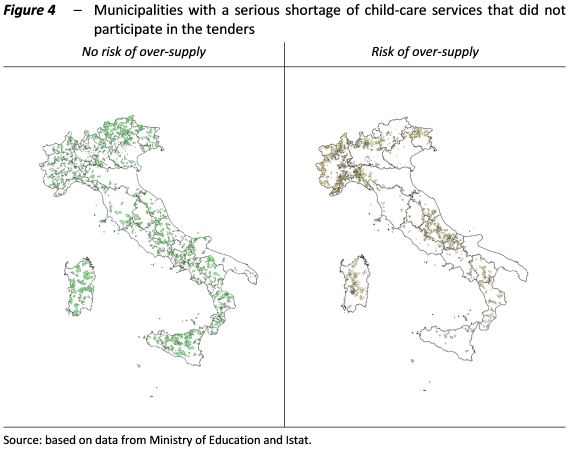