The Chairman of the Parliamentary Budget Office (PBO), Giuseppe Pisauro, testified today at a hearing (in Italian) before the Budget Committees of the Chamber of Deputies and the Senate, meeting in joint session, as part of the preliminary examination of the Update to the 2020 Economic and Financial Document (the Update) published on 5 October by the Ministry for the Economy and Finance (MEF). The following outlines the salient issues addressed in the memo submitted to the committees.

The macroeconomic scenario and the endorsement process – On 21 September the PBO issued its endorsement letter for the Government’s trend macroeconomic scenario, which contains a positive assessment for the two-year period subject to endorsement (2020-2021), although it also notes a degree of excessive optimism with regard to the subsequent period (2022-2023), which has an important impact on the public finance forecasts and debt sustainability. After endorsing the trend macroeconomic scenario, the PBO, again drawing on the analysis conducted by the panel of forecasters (in addition to the PBO, this includes CER, Prometeia and Ref.Ricerche), also assessed the policy scenario, which considers the budget measures envisaged in the Update and grants under the Next Generation EU (NGEU) programme. With real GDP expected to contract by 9 per cent in 2020, the MEF forecasts an upturn in economic activity that would translate into real GDP growth of 6 per cent in 2021. The increase in economic activity under the policy framework is mainly fuelled by faster investment growth (3.2 percentage points more than in the trend scenario) and, to a lesser extent, by consumption spending, both by households and general government.

In its overall assessment of the Government’s forecast, the PBO also decided to endorse the Update’s policy scenario for 2021, as it appears to fall within an acceptable range. The plausibility of the Update’s policy macroeconomic scenario is supported: a) by forecasts for growth in real and nominal GDP in 2021 (at 6.0 and 6.8 per cent respectively) lying close to the lower bound of the panel estimates; b) by similar assessments in the Update and by the PBO panel of the impact of the budget measures in 2021; and c) substantial agreement among the members of the PBO panel (as well as other leading forecasters) on the acceleration of GDP between 2020 and 2021.

While the MEF’s policy macroeconomic scenario for 2021 appears acceptable when judged against the forecasts produced by the PBO panel, that for the following two years – which is not subject to endorsement – retains and amplifies the issues already observed with regard to the trend scenario. The forecasts for 2022-2023 appear optimistic. The forecast for real GDP growth in the policy macroeconomic scenario exceeds the upper bound of the PBO panel forecasts by 1.1 percentage points in 2022 and 0.3 points in 2023.

Risks associated with the forecast – The short- and medium-term outlook for the Italian economy remains exposed to considerable risks, generally on the downside. The adverse scenarios are mainly attributable to the evolution of the pandemic, in Italy and abroad, as well as to financial strains.

The COVID-19 pandemic has begun to spread rapidly again in several European countries, such as France and Spain, as well as in Asia (particularly India). In recent weeks Italy has also experienced a resurgence of the disease, which has also produced an increase in hospitalisations. At the moment, no new generalised lockdowns are envisaged, but even targeted restrictions on production activities and movement would still have appreciable consequences for both economic activity and firms, which were already hit by the past recession.

Economic and monetary policy-makers are countering the crisis by expanding the balance sheets of governments and central banks. When the pandemic is eradicated by effective treatments or vaccines and the world economy returns to steady growth, it will be necessary to reduce the accumulated financial imbalances. Any mismatches in the cycle of recovery between countries could affect the risk premiums demanded by markets from economies that are rebounding less rapidly. If this eventuality should involve Italy, which has a large stock of public debt, financial tensions could quickly interact with the spending decisions of households and firms.

An assessment of the endorsement of the macroeconomic forecasts presented in the Update – The excessive optimism found by the PBO in the growth forecasts for the final years of the forecast period calls for an assessment of the practice adopted since the start of the PBO’s activity in the autumn of 2014 of using different periods for the endorsement exercise between the spring and autumn sessions. Institutional developments in recent years have in fact diverged from the original intentions. The programming contained in the EFD in April has been regularly redesigned in the autumn, and the DBP has become the document with which the Italian government transmits its medium-term plans to the institutions of the European Union. This has been reflected in the progressive extension of the temporal scope of the tables contained in Italy’s DBP. Accordingly, the PBO Board feels that it would be advisable to extend the endorsement of macroeconomic forecasts to the entire three-year forecast period in the Update as well, in order to reinforce prudence in public finance scenarios.

The public finances – The Update updates the public finance trend forecasts given in the EFD published the last April, extending the forecast period to include 2022-2023. The new estimates incorporate the deterioration in the macroeconomic scenario as well as the favourable developments in interest rates, as well as the financial effects of the decrees issued after the EFD.

The fiscal policy reflected in the policy scenario of the Update seeks to support the recovery in the context of the COVID-19 emergency within a process of gradual rebalancing of the public accounts. This strategy also takes account of the possibility of using European Union (EU) funds under the NGEU programme (the measures for which Italy will request funding are being drafted as part of the preparation of the National Recovery and Resilience Plan, NRRP). 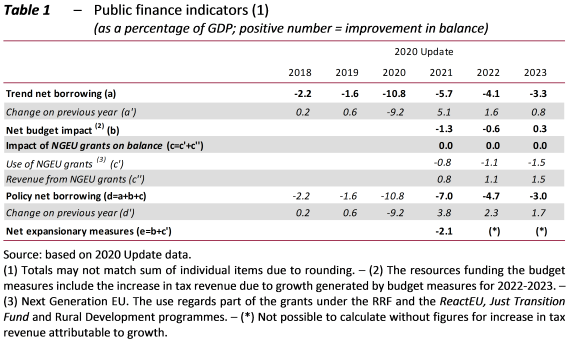 The net impact of the budget measures in the new policy scenario (Table 1, line b) worsens the nominal trend deficit by 1.3 percentage points of GDP in 2021 and by 0.6 percentage points in 2022 and improves it by 0.3 percentage points in 2023, including the favourable feedback effects in 2022-2023 attributable to the improvement in the macroeconomic scenario compared with the trend. The three-year budgetary policy is completed with the use of NGEU grants in amounts equal to 0.8 per cent of GDP in 2021, 1.1 per cent in 2022 and 1.5 per cent in 2023, with no impact on the deficit – as the expenditure financed is funded by transfers from the EU – but with a favourable impact on GDP (Table 1, line c). The overall impact of net expansionary measures can only be calculated for 2021 (which does not include the effects of feedback effects of growth on revenue) and amounts to 2.1 percentage points of GDP (Table 1, line e). In order to determine the impact of the measures for the following two years, it would be necessary to separate the reduction due to the feedback effects from the value of the net budget measures (Table 1, line b).

With regard to the content and composition of the budget package, the Update only provides general indications and limited information, which do not enable an in-depth analysis of the policy scenario. A more exhaustive assessment can therefore only be performed after the presentation of the Budget Bill. At this stage, only a few initial observations can be made:

Policy developments in the debt – According to the policy scenario in the Update, the debt/GDP ratio should increase to 158 per cent this year (23.4 percentage points more than in 2019) before turning downwards from 2021, falling to 151.5 per cent in 2023. This estimate is 6.5 percentage points lower than the peak expected this year but it still nearly 17 percentage points higher than the level in 2019. Breaking down the dynamics of the debt/GDP ratio, we find the primary surplus providing a negative contribution in the 2020-2022 period, which only becomes slightly positive in 2023 (0.1 per cent of GDP). The policy debt/GDP ratio is expected to improve on the estimated end-of-period trend value by 2.6 percentage points to 154.1 per cent of GDP. The policy decline of 6.5 points is therefore more attributable to the rapid trend growth in GDP in 2022-2023. 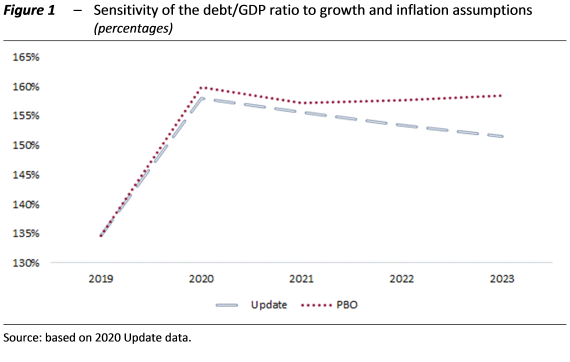 The 2020 Update presents a policy scenario for the evolution of the debt/GDP ratio up to 2026 that takes account of the impact of the use of the resources made available by the EU under the NGEU programme. Between 2021 and 2026, Italy should receive total transfers of over €75 billion (at 2018 prices), while the ceiling on loans – disbursed through the Recovery and Resilience Facility (RRF) – can be put at just under €128 billion. To these we can add about €27 billion in SURE loans. On the basis of the government’s policy objectives and resources from the EU, the Update projects a declining debt/GDP ratio over the 2020-2026 period, reaching 143.7 per cent in 2026. In the same year, the debt net of EU loans should be more than 7 points lower than the total.