The Chairman of the Parliamentary Budget Office (PBO), Giuseppe Pisauro, testified today at a hearing (in Italian) before the Budget Committees of the Chamber of Deputies and the Senate, meeting in joint session, as part of the preliminary examination of the Update to the 2021 Economic and Financial Document (the Update) published on 1 October by the Ministry for the Economy and Finance (MEF). The following outlines the salient issues addressed in the memo submitted to the committees.

The macroeconomic scenario and the endorsement process – On 24 September the PBO issued its endorsement letter for the Government’s trend macroeconomic scenario, which contains a positive assessment for the two-year period subject to endorsement (2021-2022) drawing on the analysis conducted by the panel of forecasters (in addition to the PBO, this includes CER, Oxford Economics, Prometeia and Ref.Ricerche). The PBO did note, however, significant risk factors that represent a downside threat to growth. The PBO subsequently assessed the policy macroeconomic scenario, which considers the budget measures envisaged in the Update to be implemented with the upcoming Budget Act, deciding to endorse the Update’s policy scenario for 2022, as the values of the main variables appear to fall within the range of acceptance. The MEF’s policy forecasts for 2023-2024 (which do not go through the endorsement process) appear to be slightly optimistic compared with the projections developed by the PBO panel.

Nevertheless, multiple risk factors, some even greater than those affecting the trend macroeconomic scenario, pose a threat to the policy scenario. In the assessments of the PBO panel, these risks have a greater probability of realizing than in other forecasting exercises and, despite being balanced for this year, they are mainly tilted to the downside for the coming years. Moreover, while the recent forecasts of leading analysts fully concur with the macroeconomic forecasts of the Update for 2021, the latter fall into the upper range of expectations for 2022-2024.

Risks associated with the forecast. – The evolution of the Italian economy in the coming quarters strictly depends on the assumption that the pandemic can be kept under control around the world in order to prevent strains on health systems that would require the imposition of new restrictions on economic activity.

In a medium-term perspective, the international economic conditions delineated by the leading forecasters appear favourable today, but if supply restrictions were to ease more slowly than expected, foreign demand could be undermined as early as next year. There is also a risk connected with the assumption, implicit in the MEF’s macroeconomic scenario, that Italy can make effective use of the European funds available under the Next Generation EU programme to rapidly launch the investment projects envisaged under the National Recovery and Resilience Plan (NRRP). Partial, delayed or inefficient implementation of these measures would lead to the loss of significant support for growth. More favourable developments cannot be ruled out in the medium term, as the high stock of precautionary savings accumulated last year could fuel a faster recovery in consumer spending if household uncertainty were to decline on a more permanent basis. However, the recent rise in inflation, currently driven by the rise in energy prices and shortages of intermediate goods, could be larger and more persistent than anticipated by the monetary authorities. In this case, the rise in prices would impact household purchasing power and could trigger a monetary policy reaction, with adverse effects on the recovery of the economic activity.

Over a longer-term horizon, a key factor regards the orientation of the policies. When the pandemic is eradicated and the world economy returns to steady growth, it will be necessary to reduce the accumulated financial imbalances. Any mismatches in the cycle of recovery between countries could affect the risk premiums demanded by markets for economies with especially large public debts, with possible financial tensions that could impact the spending decisions of households and firms. For the European Union countries, these risks will also depend on the new system of fiscal rules, whose revision is currently under discussion.

The public finances: the trend scenario. – The Update updates the public finance trend forecasts given in the EFD published the last April, incorporating the improvement in the macroeconomic scenario and the favourable developments in interest rates, as well as the financial effects of legislation approved after the publication of the EFD. Net borrowing is estimated at 9.4 per cent of GDP in 2021 (9.6 per cent in 2020), significantly lower than the value indicated in the EFD (11.8 per cent), which included the increase of €40 billion in the deficit authorised at that time. The improvement compared with the April forecasts can be attributed in roughly equal amounts (between €15 billion and €20 billion) to an increase in revenue connected with stronger economic growth and a decrease in expenditure connected with lower-than-expected recourse to support measures (related in part to non-repayable grants).

The public finances: the policy scenario. – The Update segments the fiscal policy stance into two phases: in the first, in 2022-2023, it will remain expansionary compared with trend developments, which are already reflecting the initial stimulus effects of the implementation of the NRRP; the second phase will begin in 2024, with fiscal policy, through appropriate primary surpluses, being more oriented towards reducing the structural deficit and the debt/GDP ratio.

With regard to the content and composition of the budget package – to be implemented with the Budget Act and the accompanying legislation – the Update only provides general indications relating to the main areas of intervention. The information available currently only allows us to formulate a number of initial preliminary observations of a general nature.

As noted, the evolution of the public finance aggregates depends on macroeconomic forecasts that appear to be exposed to mainly downside risks, both international and domestic. The realisation of the policy macroeconomic scenario will also depend on the concomitant implementation of the NRRP in full.

Much of the improvement in the trend accounts compared with the EFD is used for expansionary purposes, with a consequent deterioration in the deficit. Given the high level of public debt, it seems crucial to keep the budget aggregates on the planned path of reduction.

To achieve the objective of lowering the debt/GDP ratio in 2030 to the same level as in 2019 (i.e. about 134 per cent of GDP) as declared by the Government, reductions of about two points of GDP in the ratio would be necessary on average each year, starting in 2025. These are larger decreases than those forecast in the Update’s policy scenario for 2023 (-1.8 points) and 2024 (-1.5 points). To achieve these objectives, it is therefore necessary to maintain continuity in the setting of budgetary policy in order to pursue the strategy underlying the Update in the years to come, when appropriate primary surpluses will be necessary to reduce the debt/GDP ratio.

More specifically, according to the planning document, starting from 2024 it will be necessary to moderate the growth in current public spending and increase tax revenue by combating tax evasion. On the one hand, it appears necessary to immediately identify potential corrective measures on the expenditure side, seeking to establish a clear scale of priorities and to address the critical issues for a more effective use of available budgetary resources, thus improving the quality of spending. On the other hand, even more extensive analysis and more incisive action to combat tax evasion will play a useful role in contributing not only to budget consolidation but also to reducing the tax burden. The implementation of a tax reform that reduces the tax burden will be credible only if accompanied by the achievement of a significantly lower level of debt in relation to GDP than is currently the case.

Developments in the policy public debt. – Thanks to more favourable macroeconomic conditions, the Update envisages a significant improvement in the policy profile of the debt/GDP ratio compared with the EFD, with the initiation of a downward path already this year. At the end of the year, the debt is expected to stand at 153.5 per cent of GDP, more than two percentage points below the 2020 level. According to this policy profile, the stock of debt in 2024 is expected to be just over 146 per cent of GDP, or about half the distance between the level in 2020 (155.6 per cent) and the pre-COVID level (134.3 per cent).

Breaking down the evolution of the debt/GDP ratio into its various determinants, the primary balance has an unfavourable impact over the entire policy horizon (almost 11 points of GDP overall), which is more than offset by the snow-ball effect – linked to the differential between interest expenditure and the contribution of nominal GDP – with nominal GDP growth contributing 11 points in 2021 alone and more than 20 points overall in the following three years. Furthermore, the slowdown in the nominal growth rate forecast from 2022 onwards would be partially offset by a progressive reduction in the incidence of interest expenditure, making real GDP growth below 1 per cent per year in all likelihood sufficient to keep the differential between nominal growth and the average cost of debt in positive territory.

The impact of ECB purchases of government securities. – Between January and July 2021, Eurosystem purchases of financial assets on the secondary market under the Asset Purchase Programme (APP) and the Pandemic Emergency Purchase Programme (PEPP) continued at a robust pace, although more slowly than in 2020. It is expected that total purchases of financial assets by the Eurosystem for the entire euro area will be equal to about €1,060 billion in 2021 and about €513 billion in 2022.

Using a number of assumptions, it is possible to estimate the possible impact of the Eurosystem’s purchase programmes on the Italian government securities market for 2021 and 2022, i.e. the net flow of securities that will have to be absorbed by private investors.

Examination of developments in the debt/GDP ratio. – The PBO has assessed the sensitivity of the policy developments in the debt/GDP ratio presented in the Update for 2021-2024 (“the Update scenario”) to alternative assumptions for the inflation rate and real growth based on the forecasts developed by the PBO for the same period (“the PBO scenario”).

Starting from this macroeconomic scenario, the simulation assumptions imply a less favourable trajectory for the debt/GDP ratio than that projected by the Government (Figure 1). The debt would start to decline in relation to GDP as early as 2021 in the PBO scenario as well, albeit less rapidly (reaching 154.3 per cent), while in 2024 the debt would be equal to 149.3 per cent of GDP, 3.2 percentage points higher than the ratio expected in the Update. 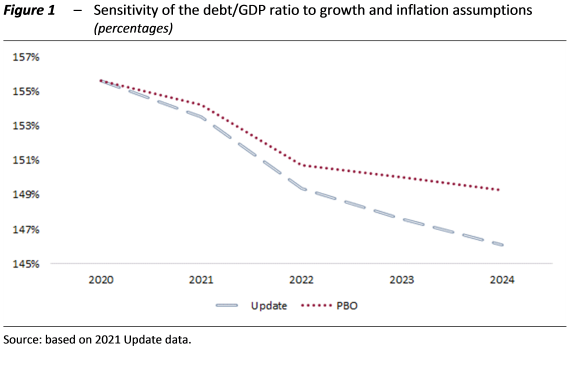