Hearing of the PBO on the “Family Act”

The Board member of the Parliamentary Budget Office (PBO), Alberto Zanardi, spoke today at a hearing (in Italian) before the Social Affairs Committee of the Chamber of Deputies, which is examining Bill C. 2561 containing “Enabling authority for the Government to support and promote the family” (the Family Act).

The substantial document filed with the Committee reviews the objectives, tools and resources for the implementation of the enabling authority set out in the Family Act (section 1); examines the measures announced in the National Recovery and Resilience Plan (NRRP) ‑ presented to Parliament last January and now under review – as they pertain to the objectives of the Family Act, which cannot be overlooked in any assessment of the latter’s potential (section 2); analyses the current spending behaviour of families with children on education and on non-formal and informal learning and existing financial support measures (section 3); provides contextual information on female participation in the labour market, the difficulties of reconciling work and private life and the gender gap (section 4); offers an international comparison of social protection expenditure for families with children and a brief description of the main measures implemented in France and Germany (section 5); and concludes with a number of general comments on the Family Act (section 6).

The Family Act has essentially two objectives: 1) reversing the decline in the birth rate through support for families with children and the recognition of the social value of educational and learning activities, including non-formal and informal learning, for children and young people; and 2) increasing female employment, including measures to facilitate work-life balance. They are interconnected, since the burden of caring for children, but also the elderly and the non-self-sufficient, still falls mainly on women.

To achieve these objectives, multiple tools are identified: a universal monetary transfer to support families with dependent children without limitations on use, such as the universal allowance; tax breaks and monetary transfers for deserving expenditure; incentive measures, such as strengthening incentives for female employment or the introduction of flexible forms of work to promote the reconciliation of family and work life; the direct provision of public services, as in the case of expanding the availability of socio-educational services for children; regulatory measures, for example relating to the procedures for using parental leave.

On the one hand, the Family Act has been superseded in a number of salient aspects by recent measures introduced with the 2021 Budget Act (the experimental extension of mandatory paternity leave to 10 days; contribution relief for hiring unemployed women; the allocation of resources to the Municipal Solidarity Fund to finance the expansion of municipal social services and increase the availability of places in nursery schools; the establishment of a fund to support female entrepreneurship) and, above all, the imminent final passage of the enabling bill on the unified and universal allowance (AS. 1892), which will also have a decisive impact on its budget. The two bills share the entire budget, except for the portion concerning the modification/repeal of just two existing measures: vouchers for the payment of fees for nursery schools and other child services and the IRPEF tax credits for rent payments for out-of-town university students. The resources from the repeal of these two measures amount to about €0.7 billion (Table 1), which would therefore represent – if implementation of the universal allowance used all the resources currently provided for in AS. 1892 – the resources available to finance the measures provided for in the Family Act once the universal allowance is finally approved. 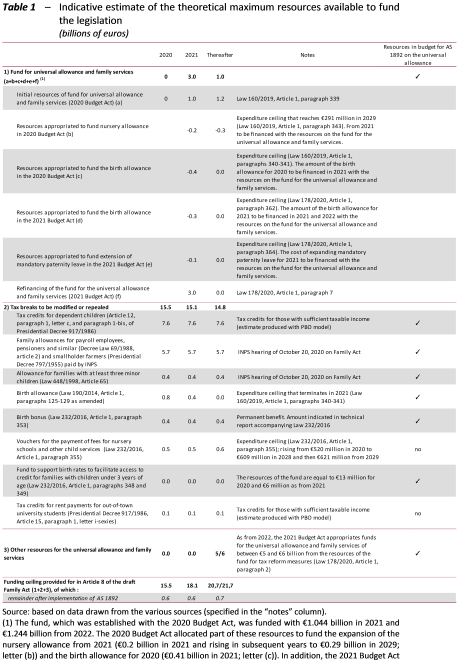 On the other hand, the potential of the Family Act is enhanced by a number of lines of action explicitly indicated in last January’s NRRP. The current version of the latter accompanies the Family Act measures that have budgetary effects on current account with capital expenditure in order to bridge gaps in the supply of public services at the territorial level, seeking to eradicate educational poverty, enhance the prospects of young people, increase youth employment and promote the reconciliation of work and private life, as well as announcing more far-reaching reforms. The Family Act and the NRRP must therefore be considered in an integrated manner, given that they share objectives and part of the measures and the possible impact on the financial resources that could be made available through the NRRP for the implementation of the Family Act as well.

The (clear) objectives and the (many) tools present in the bill are framed by rather general principles and directive criteria governing the enabling authority, which leave many of the fundamental design choices for the measures announced to the legislative decrees implementing the enabling authority. These choices concern four aspects in particular.

Based on information drawn from the Istat survey of household expenditure in 2017, supplemented with the administrative data from ISEE (equivalent economic status indicator) returns and tax returns, an analysis was conducted of family spending on the educational activities of children and young people in both public and private schools (tuition and fees, meals and transport services, school books, school courses and trips) and on activities connected with non-formal and informal learning (non-school books, sports activities, summer camps and playrooms, music and dance courses and lessons) (sections 3.1 and 3.2 of the hearing).

Educational spending, as well as that on non-formal and informal learning, is significantly polarised towards wealthier families in all segments except that of public schools (Fig. 1). In particular, such expenditure as a proportion of the total expenditure of user households decreases as their economic circumstances improve (panel C), but this effect is more than offset by the fact that the poorest households use the services in question less (panel B) with the result that the proportion of such expenditure for all households increases as we go from the poorest to the richest (panel A). 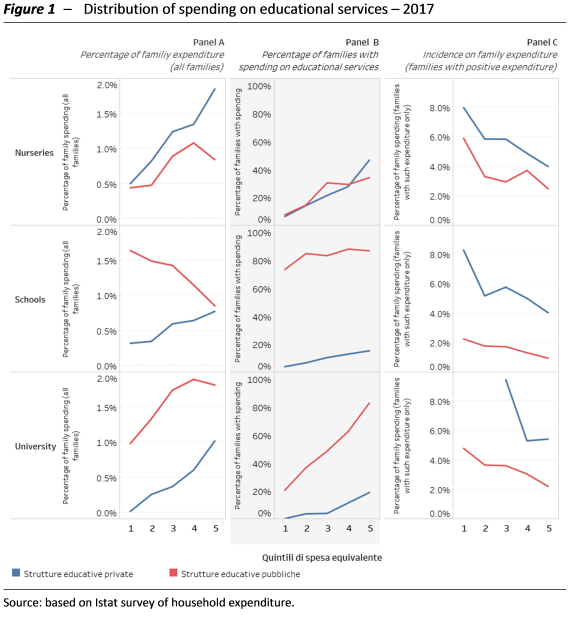 An analysis of the availability of nursery schools around the country shows that in 2018 authorised places could serve about 25.5 per cent of potential users (of which about half were publicly operated) and that effective uptake (i.e. actual users per 100 resident children aged 0-2 years) at public or officially authorized private facilities was equal to 14.1 per cent. Both of these indicators varied widely around the country. Focusing on municipal nurseries, in many regions of the South the supply of public facilities, although lower than the national average, was not fully taken up by families: under-use of public services is found in Abruzzo (66.1 per cent) and in Basilicata (66.8 per cent), while greater take-up, potentially leading to shortages of public places, can be found in Tuscany (93 per cent), Lazio (90.8 per cent) and Lombardy (90.3 per cent).

The under-use of early childhood educational services is in most cases due to the specific decision of families, dictated by the child’s age or health (42.2 per cent) or the presence of a family member who can take care of the child and/or a desire to not delegate the educational function (38.5 per cent). Reasons for rationing supply (cost, remoteness of facilities, lack of demand) emerge on average in 15.8 per cent of cases, with greater frequency in the North and in the suburban municipalities of metropolitan areas. The burden of rationing could, however, be underestimated by these responses, given the rate of early enrolment in kindergartens – which are less expensive for families – especially in the South, thus suggesting that fees for nurseries could be unsustainable. Finally, demand for childcare services could grow as a result of the expansion of female participation in the labour market and the rise in the female employment rate, that could potentially stem from policies intended to promote greater flexibility in the labour market and encourage female employment and entrepreneurship contained in both the Family Act and the NRRP. It could also reflect the strengthening of measures to reduce the costs of access to nursery schools announced in the legislation under review here.

If the Family Act is properly formulated and implemented, it could represent an opportunity: 1) to strengthen and make permanent – and therefore certain – a number of important experimental programmes designed to support parenthood and gender equality; 2) to provide universal support that can also be used by the poorest families in order to ensure equal opportunities in growth and in formal, non-formal and informal educational paths for children regardless of the economic circumstances of their family and foster real cultural change; and 3) to reorganise and systematise a fragmented system of programmes established by multiple pieces of legislation. However, this assumes additional financial resources can be found, since the imminent approval of the enabling bill on the universal allowance will eventually drain off most of the funding provided for in the Family Act. In view of these financial constraints, but also to ensure adequate coordination between the various lines of intervention, it is necessary to develop an integrated vision of the Family Act with the future NRRP. The two measures must go hand in hand, complementing each other. Recall that the version of the NRRP presented in Parliament last January provided for an expansion of the nursery and integrated services plan to promote work-life balance, also with the aim of rebalancing supply around the country, increasing school hours and therefore expanding the supply of educational services, and increasing infrastructure and the availability of territorial assistance services and networks for people with disabilities or the non-self-sufficient. With regard to gender equality, one of the three horizontal priorities of the six missions into which the plan is structured, initiatives are envisaged to encourage the participation of female students in the STEM disciplines and foster more highly qualified female employment as well as provisions to grant contribution relief for the hiring of women and support for female entrepreneurship.