The Chairman of the Parliamentary Budgetary Office (PBO), Giuseppe Pisauro, spoke today at a hearing (in Italian) before the Bureau of the Senate Finance and Treasury Committee as part of the debate concerning the decree law on the reduction of the fiscal burden on employees. After examining the specific measures included in the decree law, the PBO Chairman discussed the impact of the measures on the persons affected and addressed a number of specific aspects of the measures, including their coordination with other income support instruments.

From July this year, the decree will introduce two measures: a permanent cash transfer supplementing income from employment that replaces and extends the €80 bonus and a personal income tax credit in addition to the existing credit benefitting taxpayers with incomes of more than €28,000, who do not qualify for the cash transfer (Figure 1). This second component, which determines the phase-out of the benefit, is temporary, however, as the legislation only provides for its application to income earned in the second half of 2020. 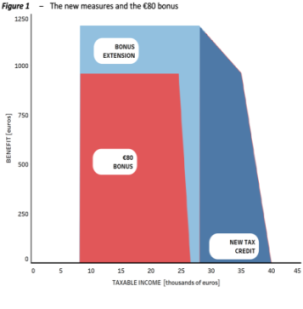 The renewal of the measure for subsequent years would require the appropriation of €1.8 billion in additional resources above and beyond the amount indicated in the technical report accompanying the decree, as well as the full use of the Fund for the reduction of the fiscal burden established with the 2020 Budget Act (€5 billion) and the amounts currently appropriated to fund the €80 bonus (€9.7 billion).

When fully operational, assuming the renewal of the additional tax credit from 2021, the two measures will benefit over 15 million employees by an average additional amount of around €450.

The PBO analysis has identified a number of significant issues.

First, similarly to what happens for the €80 bonus, the new measures do not reduce the fiscal burden for employees with insufficient qualifying income (below €8.150) and instead create, as a result of the cash transfer, a sort of negative tax equal to the entire benefit for incomes of €8,150. This negative tax thus creates a particularly sharp discontinuity with respect to those with incomes just below this threshold. This represents a violation of the principle of horizontal equity – in that it treats taxpayers with similar incomes very differently – and generates distortions, as workers will have an incentive to report income equal to or just above the threshold.

The new benefit has a less marked phase-out than the €80 bonus. This attenuates but does not eliminate a critical problem of the previous bonus system, which produced very high marginal tax rates when its amount began to decrease rapidly (for incomes between €24,600 and €26,600), causing potentially highly distortive effects on the supply of labour. In this income bracket, the effective marginal rate reached about 80 per cent. Under the new mechanisms, marginal rates only go up to 61 per cent, although this increase affects a larger portion of the income distribution (between €28,000 and €40,000) comprising a greater number of taxpayers (2.9 million compared with about 1 million).

Equity issues also emerge due to the different tax treatment of households with different numbers of income earners and of taxpayers with income from different sources. In particular, the mechanism proposed in the decree further expands the tax advantage for households with two-income earners, which are already structurally favoured by a tax system based on individuals, such as personal income tax. The individual nature of the bonus (both the existing €80 bonus and the one envisaged in the decree) though encourages participation in the labour market, as it is only paid to people receiving income from payroll employment. Furthermore, the new measure reinforces the tax advantage already produced by the €80 bonus for employees compared with pensioners, both in the negative tax area (not envisaged for pensioners) and for higher incomes up to €40,000 (with average tax rate differences of almost ten points at the €15,000 income level and around 4.5 points at €30,000).

The proposed mechanism, and specifically the expansion of the cash transfer, which represents the permanent element of the measure, makes the comprehensive and structural reform of personal income tax announced by the Government even more challenging. Taken in isolation, it accentuates the disparities in tax treatment between individuals with different sources of income and different types of household and exacerbates the irregularity of marginal tax rates. For 2020, this aspect is offset by the introduction of the additional tax credit. However, as mentioned above, retaining the latter in subsequent years would require additional funding of €1.8 billion per year, in addition to the full use of the Fund for the reduction of the fiscal burden on employees.

Examining the redistributive effects on beneficiary households (Figure 2), an analysis conducted with the PBO microsimulation model finds that the scale of the benefit differs by decile of household income. In terms of its impact on income, the €80 bonus was more generous for the lower deciles (with the exception of the first), while the provisions in the decree law produce additional effects that most benefit households in the higher income deciles (with the exception of the last), with an effect opposite to that created by the previous bonus. 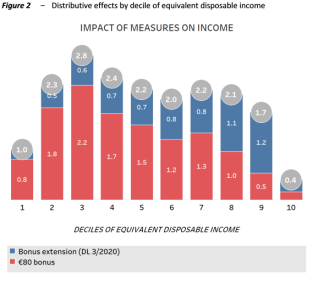 The hearing elicited more general considerations on the coexistence of different income support tools in Italy’s current welfare system. In particular, there are discontinuities and overlaps between the new bonus, as redesigned in the decree, and the Citizenship Income, prompting consideration of the advisability of including the new bonus among the income categories included in the calculation of the equivalent economic status indicator (ISEE), consistent with an approach to assessing the economic status of households that considers disposable income (income net of tax).

Overlaps between the two income support mechanisms are greater in the case of larger households, such as a household with a wage earner, a dependent spouse and a dependent child.

[1]   With an annual rent of at least €3,360, the maximum contribution payable under the Citizenship Income mechanism.