The Chair of the Parliamentary Budget Office (PBO), Lilia Cavallari, spoke today before the Special Committees of the Chamber and Senate meeting in joint session. The hearing (in Italian) regarded the Update of the 2022 Economic and Financial Document (the Update) – in the revised version approved by the Council of Ministers on 4 November 2022 – and the Report to Parliament with which the Government requests authorization for a new budget deviation. The following summarises the main elements of the memo provided to the Committees.

On 4 November the PBO sent its endorsement letter for the macroeconomic trend scenario (i.e. that on current legislation basis) contained in the latest version of the Update (Table 1), which was revised by the Government from the version presented at the end of September. The data for the two years covered by the endorsement exercise (2022-2023) show acceptable differences from the median forecasts of the panel (which, in addition to the PBO, includes four independent institutes: CER, Oxford Economics, Prometeia and Ref.Ricerche) and the forecasts of the PBO itself (Table 2).

The policy scenario formulated by the Government in the revised version of the Update issued in November was also endorsed by the PBO. The endorsement exercise, which in this case focuses on 2023 (the forecasts for 2022 coincide with those of the trend scenario, which had already been endorsed), found that the main variables of the MEF’s macroeconomic scenario fall within an acceptable range, not far from the estimates of the PBO and the median of the panel forecasts (Figure 1). 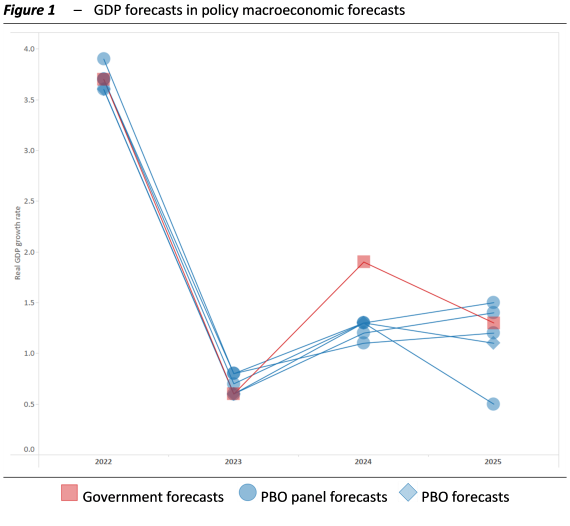 The MEF’s policy scenario for 2024-2025, a period not subject to endorsement, nevertheless appears optimistic. In particular, for 2024 the real GDP growth projected in the Update (1.9 per cent) exceeds the PBO forecast and the upper bound of the panel forecasts by more than half a percentage point.

These forecasts have been formulated within an international environment dominated by uncertainty. The downside risks to growth in the coming years depend not only on non-economic factors, such as the war in Ukraine and the pandemic but also on economic variables that have a major impact on production, such as commodity prices and bottlenecks in supply and international logistics. The policy stances of the central banks are also crucial: if the surge in inflation does not subside with the monetary policies already adopted and those announced, a more decisive response may be required, at the risk of slowing economic activity even more.

In the trend scenario of the Revised 2022 Update, the deficit/GDP ratio is unchanged for 2022-2023 (at 5.1 and 3.4 per cent), while it was raised by a tenth of a point both for 2024 (to 3.6 per cent) and 2025 (to 3.3 per cent; Table 3). The main differences on the revenue side regard direct and indirect taxes starting from 2023 – due to a higher nominal GDP (and above all the household consumption component in the coming year) – while those on the expenditure side involve interest expenditure this year and pensions starting from 2024, given the lag of one year in the response to higher expected inflation, especially in 2023. 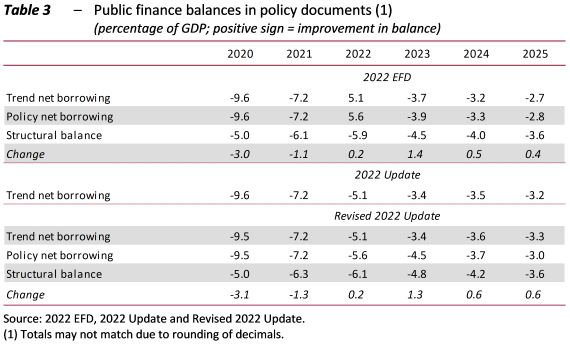 The dual commitment to return the deficit to 3 per cent of GDP in 2025 (thanks in part to the return of primary surpluses of 0.2 per cent of GDP in 2024 and 1.1 per cent the following year) and to reduce the debt/GDP ratio is welcome. However, the room available for manoeuvre is tighter than in the past and careful monitoring will therefore be necessary to assess the evolution of macroeconomic and public finance conditions as we move forward.

… but the deficit targets are revised upwards, primarily to aid households and firms

In the policy scenario, the Government confirms a deficit of 5.6 per cent of GDP as the target for 2022 and intends to use the remaining budgetary resources (€9.1 billion, or 0.5 per cent of GDP, i.e. the difference between the policy deficit and the trend deficit) primarily for further measures to support households and firms in coping with the high cost of energy (which will be set out in the fourth “Aid Decree”). For the following three years, however, the policy targets have been revised upwards compared with the EFD in April: from 3.9 to 4.5 per cent of GDP in 2023, from 3.3 to 3.7 per cent in 2024 and from 2.8 to 3 per cent in 2025. With the Report to Parliament, the Government requested authorization for a deviation both to use the additional €9.1 billion in 2022 and to increase the deficit forecast for 2023-2025. This represents a more gradual profile for deficit reduction, deemed necessary by the Government in light of the slowdown in the economy expected over the next few months, with the trend forecast for the deficit worsening in 2024-2025 compared with the EFD projection.

The Government plans net measures increasing the deficit totalling 0.5 per cent of GDP this year, rising to 1.1 per cent next year and declining to 0.1 per cent in 2024. For 2025, a net deficit reduction of 0.2 per cent of GDP is projected.

The Update does not provide any indication regarding the content and specific measures in the budget package. The Report to Parliament indicates that the net resources available will amount to about €21 billion in 2023 (to be used in the early months of the year) and €2.4 billion in 2024. They will be allocated in the next Budget Act to measures designed to enhance the protection offered to households and firms against high energy prices. The measures planned for 2024 appear to be aimed at offsetting the prolonged effects over time of the rise in energy prices since 2022 (for example, they could finance measures aimed at encouraging participation in tenders for the construction of the public works envisaged in the NRRP despite the price increase).

On the other hand, no information is provided regarding either the scale of the gross budget package necessary to enable other measures in the Government’s economic policy programme, or the measures necessary to cover this commitment and their scope of application. No information has been provided about the corrective measures to be taken in 2025 to achieve the deficit target of 3 per cent of GDP. It will be necessary to wait for the update of the 2023 Draft Budgetary Plan for any initial information.

Public debt continues to decline, although the reduction is shadowed by risk factors

The Government expects the debt/GDP ratio to drop sharply in 2022 – to 145.7 per cent of GDP, from 150.3 per cent in 2021 – and then decline at a slower pace in each of the following years: to 144.6 per cent in 2023, 142.3 per cent in 2024 and 141.2 per cent in 2025 (just below the policy level indicated in last April’s EFD, but about 7 percentage points higher than the pre-pandemic level registered in 2019). However, a sensitivity analysis conducted on the basis of growth and inflation data estimated by the PBO (the PBO scenario in Figure 2) shows that the downward path of the debt/GDP ratio could level off in 2023 before resuming its decline in subsequent years. 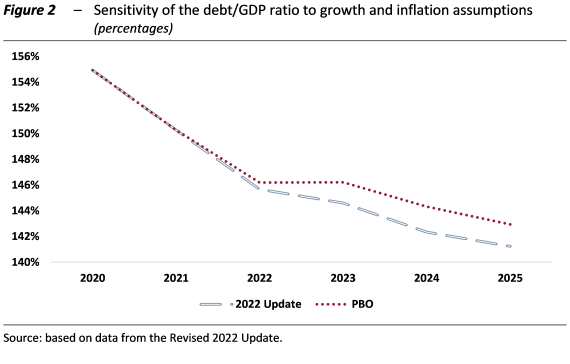 In 2022, Eurosystem secondary-market purchases of Italian government securities will total an estimated €92 billion, less than half the volume of 2021. In this scenario and considering the forecast for the state-sector borrowing requirement in the Update policy scenario, government securities issues in the primary market gross of redemptions and net of Eurosystem secondary-market purchases would amount to €326 billion, €47 billion more than last year.

In 2023, Eurosystem purchases of Italian government securities should only involve the reinvestment of principal amounts repaid on maturing securities and are projected to amount to around €65 billion. Next year, gross issues in the primary market net of Eurosystem secondary-market purchases would amount to €414 billion, €88 billion greater than in 2022.

Estimated government securities issues in the primary market net of redemptions and net of Eurosystem secondary-market purchases would turn positive in 2022 at €12 billion (last year, the figure was a negative €51 billion), rising further in 2023 to around €73 billion.

Accordingly, as a result of the termination of net purchases of government securities by the Eurosystem, the private sector, after a number of years, will have to absorb a certain additional volume of public debt as early as this year and even more from next year.

Risks to the public finances remain, including those related to the implementation of the NRRP

Particular attention will have to be paid to monitoring next year’s public accounts, bearing in mind the possibility that the Government will have to implement additional measures to counter high energy prices, since the measures included in the budget package will only cover the first three or four months of 2023. For 2024, the public finance figures are estimated on the basis of a GDP growth rate that, in the view of the PBO, appears optimistic. Furthermore, the achievement of the policy objectives is generally exposed to the considerable uncertainty engendered above all by international risks.

Finally, it is necessary to ensure that the NRRP spending programme will not be rescheduled any further, as this would have an impact on the growth path for the economy set out in the Update. In order to comply with the implementation deadlines specified in the NRRP, additional strengthening of administrative capacity and a more decisive simplification of authorization processes are required. In particular, an extraordinary effort on the part of all implementing bodies will be required to achieve the investment growth forecast for 2023 (34.7 per cent).