Uncertainty about the outlook for the world economy has risen since the spring and the risks are increasingly on the downside. In this scenario, according to the August Report on Recent Economic Developments, Italy appears to perform better than expected in 2022, with a GDP growth of 3.2 per cent. Next year, however, the country could experience a sharp deceleration.

Various sources of uncertainty are burdening the world economy – At the international level, signs of fragility have increased in recent months, and uncertainty has heightened (Figure 1), reflecting a variety of factors. 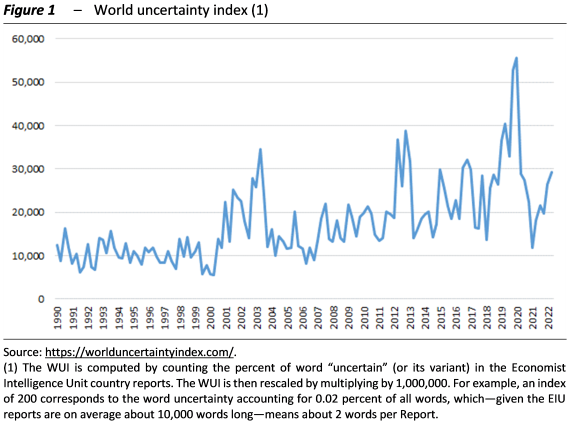 The conflict between Russia and Ukraine is continuing beyond initial expectations, creating strong tensions in commodity markets (in mid-July, the gas price was more than twice its level before the invasion of Ukraine). Central banks have accelerated the normalisation of their monetary policies, making them less accommodating in an attempt to stem inflation, which in the euro area rose in July to 8.9 per cent (from 8.6 per cent in June), according to preliminary Eurostat estimates. In addition to damaging China’s domestic economy (GDP growth slowed from 4.8 per cent in the first quarter to 0.4 per cent in the second), the country’s zero-COVID policy of China is also choking global supply chains.

All of this has produced a significant deceleration in the world economy: the United States saw GDP fall in both the first and second quarter, thereby slipping into a technical recession, while the International Monetary Fund revised its forecasts for global GDP growth downwards (to 3.2 per cent for this year and 2.9 per cent for 2023).

Italy recovers and stands out in Europe – Preliminary estimates released by Istat in July indicate that Italian GDP registered a strong recovery in the second quarter, thanks primarily to the lifting of anti-COVID restrictions, increasing by 1.0 per cent compared with the first quarter and by 4.6 per cent on an annual basis. The quarter-on-quarter increase outpaced that recorded by the euro area (0.7 per cent), as it did in all four quarters of 2021. Thanks to this surge, Italy’s economic activity is about one percentage point greater than pre-pandemic levels (Figure 2), in line with the French economy and ahead of the growth recorded in Germany. 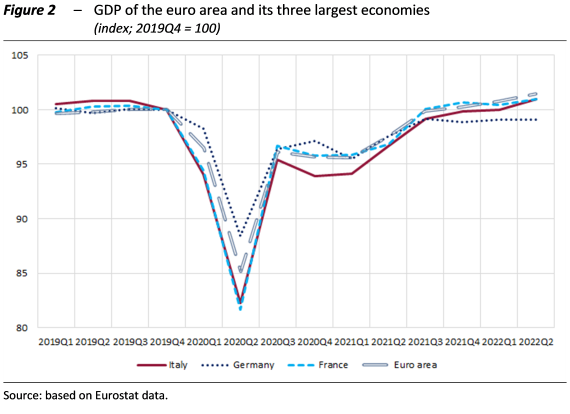 Fewer unemployed but more vacancies – Between January and March, the unemployment rate fell to 8.6 per cent, reflecting a further increase in the employment rate (to 59.7 per cent), with a slight rise in the activity rate. In the same period, however, the vacancy rate also increased, reaching an all-time high (Figure 3). In particular, businesses encountering the most significant difficulties in finding staff are those operating in construction, tourism, and the information and communication sectors. 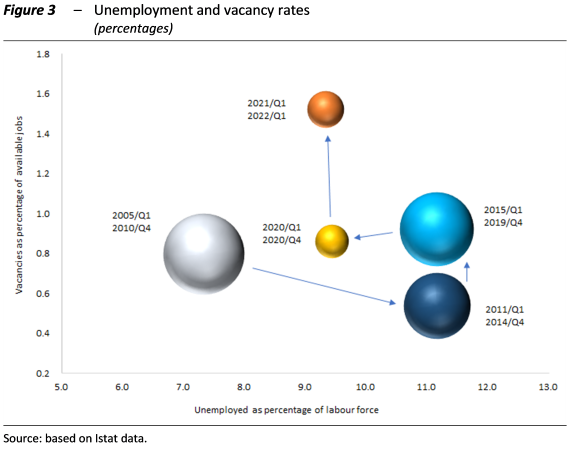 In general, sectoral trends and labour market conditions are favourable, yet the uncertainty of households and firms, as measured by the PBO indicator, began to rise again in the second quarter, interrupting the progressive decline that had begun last year. The climate of confidence deteriorated primarily among consumers, whose confidence index slipped to 100.3 between April and June, about nine points lower than in January-March.

The long swell of inflation – Inflation, which remains at its highest levels in the last 30 years, has contributed significantly to this deterioration. According to provisional Istat data, in July, consumer prices increased by 7.9 per cent, a level not seen since 1986. Although the prices of energy goods are slowing, especially the regulated component, the prices of food and transport services are accelerating. And not only that: core inflation (excluding the prices of energy and unprocessed food) has also risen, reaching 4.1 per cent last month, from 3.8 per cent in June, driven in particular by increases in the prices of housing, water, electricity and fuels and transport. Inflation acquired for 2022 reached 6.7 per cent for the general index and is about half that for the core component (3.3 per cent).

The usual methods of calculating core inflation might not fully identify trends at this particular moment. A measure known in the literature as trimmed-mean inflation is obtained by excluding spending items that have registered extreme variations (the lowest and highest 10 per cent of the distribution) from the inflation calculation. In recent months, the core inflation figure obtained using the trimmed mean has been about one point higher than ordinary core inflation (Figure 4). 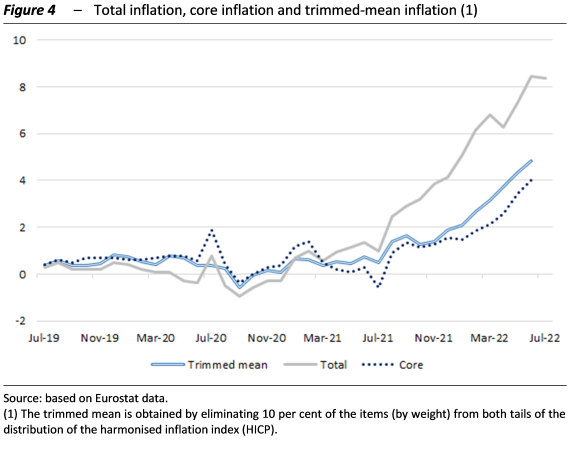 2022 GDP better than expected, but growth will slow in 2023 – In light of developments in recent months, the PBO has modified its forecasts for the Italian economy in the 2022-2023 period. The growth forecast for 2022 has been revised upwards by 0.3 points (from the 2.9 per cent formulated last April to 3.2 per cent; Table 1) in reflection of the favourable developments in the first half of the year, which benefited from an expansionary fiscal policy. By contrast, the forecast for 2023 has been lowered by 1.2 percentage points compared with the spring projections, to 0.9 per cent. The downward revision is primarily attributable to the protracted conflict in Ukraine, which has engendered a deterioration in foreign demand and more persistent inflation.

The projections assume the full implementation of the NRRP investment programmes, which would substantially support GDP growth (over 1.5 percentage points in the 2022-2023 period) and therefore represent a critical element of the forecast. Capital accumulation should remain the primary driver of domestic demand, especially construction. By contrast, consumption would increase (2.0 per cent) more slowly than GDP this year before decelerating further in 2023 (0.8 per cent) due to the weakening of income from employment. 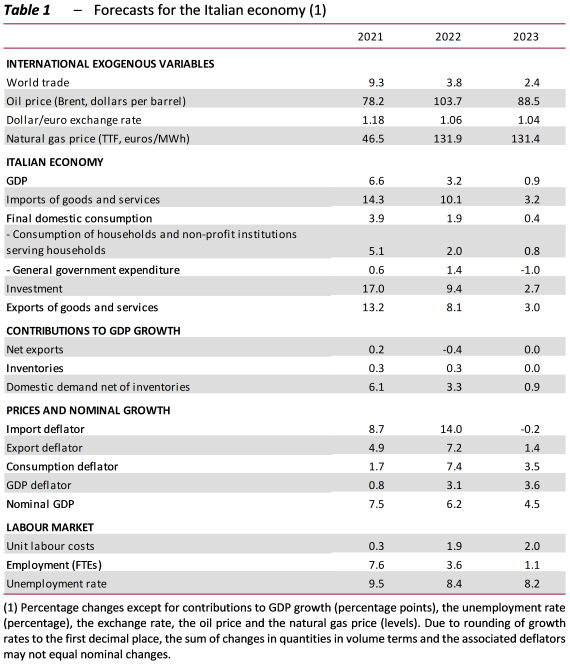 Risks on the horizon and the spectre of an interruption of Russian gas – The macroeconomic scenario for the Italian economy is exposed to a variety of risks, especially of international nature, and are mainly oriented towards the downside, with the repercussions mainly coming in 2023.

The greatest of these risks is the evolution of the conflict in Ukraine, its duration and the impact it could have on the prices and availability of commodities, particularly energy and agricultural goods. The forecast scenario presented in this Report does not assume the interruption of gas supplies from Russia during the forecast period. If such an interruption were to materialise, the repercussions for the Italian economy would be substantial in terms of both growth and inflation. According to several recent Italian and international studies, the complete interruption of gas supplies from Russia could reduce Italian growth by up to four percentage points, with the largest impact in 2023. The impact on inflation would be even more significant than that on growth but would still mainly affect 2023. However, the scale of the impact of a reduction in gas supplies depends on varied and difficult-to-predict factors and conditions. Depending on these conditions, some of which are institutional and regulatory, the effects of such a shock could vary significantly.