While continuing to grow, the global economy has been impacted by the fourth wave of the pandemic and by a larger and more persistent rise in inflation than expected. The February Report on Recent Economic Developments analyses the new outlook, drawing on the most recent data – between the end of last year and the early months of 2022 – to update the forecasts for the Italian economy, prepared in October for the endorsement of the macroeconomic scenario in the Update to the 2021 Economic and Financial Document (Update).

The recovery continues despite Omicron – The sharp upturn in new infections with the Omicron variant combined with bottlenecks in global supply chains continue to slow production. In December, global indices of confidence among purchasing managers were virtually unchanged (Figure 1) at values consistent with an expansion in economic activity but below those registered in mid-2021. At the geographical level, a decline in the advanced countries has been offset by a rise in the developing countries. 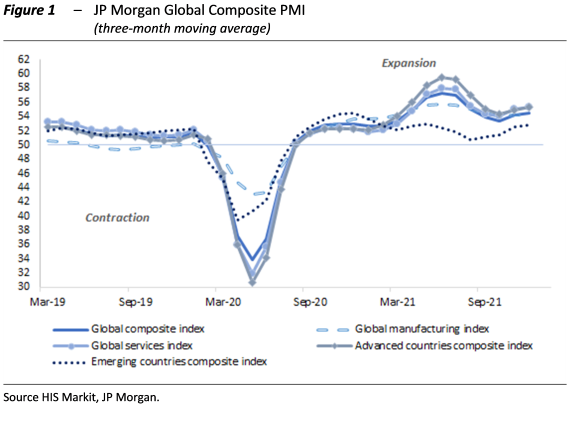 On 25 January this year, the International Monetary Fund (IMF) published an update of its October forecasts. The new projections reflect more modest growth expectations for this year than the previous forecasts, mainly due to the new restrictions introduced to stem the fourth wave of the COVID-19 pandemic and persistent difficulties in supply chains. World gross domestic product is forecast to grow by 4.4 per cent this year, a downward revision of five-tenths of a percentage point compared with October. The IMF expects inflation to remain high this year, at 3.9 per cent in the advanced countries and 5.9 per cent in the developing economies. In 2023, world gross domestic product is expected to increase by 3.8 per cent, slightly faster than the October projections.

The risks to which the global economy is exposed remain on the downside. In addition to the uncertainties concerning the pandemic, supply bottlenecks and the volatility of commodity prices, the IMF considers various threats to financial stability on top of the by now structural risks, of geopolitical tensions and adverse natural events attributable to the climate emergency.

The Italian economy approaches pre-COVID levels – The Italian economy recovered quickly in 2021, driven by the easing of restrictions imposed to combat COVID-19. After the jump in GDP in the spring, a similar expansion was recorded in the summer (2.6 per cent compared with the second quarter), followed by a moderate increase in the final part of 2021. The preliminary estimate of GDP growth, released by Istat at the end of January, indicates growth of 0.6 per cent on average in October-December. Output returned to half a percentage point below that registered at the end of 2019, ahead of Germany but slightly behind France and the euro area as a whole (Figure 2). 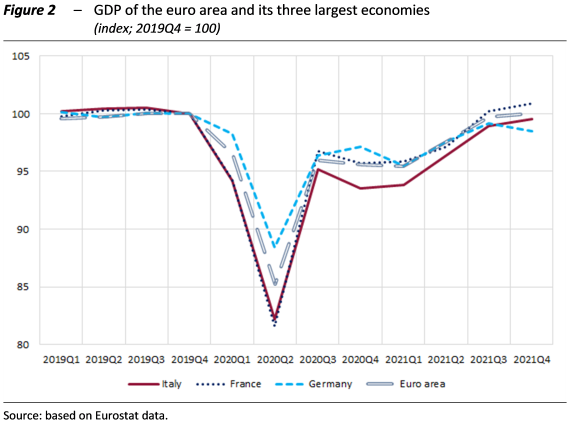 According to the quarterly accounts GDP increased by 6.5 per cent overall in 2021 compared with the previous year, when it contracted by 8.9 per cent. The growth should translate into a similar expansion in the annual accounts. The statistical carry-over impact for the current year is 2.4 percentage points.

Sectoral indicators in the last few months have been consistent with a moderate expansion, despite many signs of a slowdown. In the final part of 2021, the PMI for the manufacturing sector continued to indicate expansion, but in January the index fell by almost 2 points (to 58.3) compared with December. The deterioration reflected not only the ongoing strains impacting logistics, the availability of materials and production costs but also the slowdown in orders and staff shortages connected with COVID-19. The aggregate index of business confidence, obtained as the weighted average of sectoral indices, also stabilised in the fourth quarter compared with the July-September average but deteriorated significantly in January. According to the PBO index, the uncertainty of households and firms was almost unchanged in the final part of last year, with a slight decline in the business component offset by an increase for consumers.

Inflation raises its head – Last year was characterised by strong price increases across expenditure items, energy products first and foremost. Consumer inflation reached 1.9 per cent on average for the year (from -0.2 per cent in 2020), its highest value since 2012. The year-on-year changes in prices gradually intensified over the course of 2021, going from one per cent in the spring to about four per cent at the end of the year. Italian inflation in 2021 was still lower than that of the euro area as a whole (2.6 per cent in 2021), with which the negative differential widened last year (Figure 3), generating gains in price competitiveness for exports.

In January, however, consumer inflation in Italy increased to about five per cent, a level never seen since the launch of the European Monetary Union, generating a considerable statistical impact (of more than 3 percentage points) on 2022.

The inflation expectations of firms and households as measured by Istat confidence surveys increased in the second half of the year. The Bank of Italy’s latest Survey on Inflation and Growth Expectations is similar in tone. According to IHS Markit’s survey of purchasing managers at manufacturing firms, price pressures eased only slightly in January as the impetus of material costs, material shortages, and transport and energy prices remained substantial.

The sharp rise in inflation has had differentiated impacts among economic operators. The price increases for energy products have primarily impacted the budgets of lower-income households, which allocate a large share of their spending to these goods. In the case of firms, energy costs largely weigh on industrial companies, especially energy-intensive firms (metal product fabrication, chemicals, paper and wood processing, ceramics and cement). These sectors will find it difficult to immediately transfer the cost to sales prices in a period of still uncertain demand, with an inevitable erosion of profit margins. 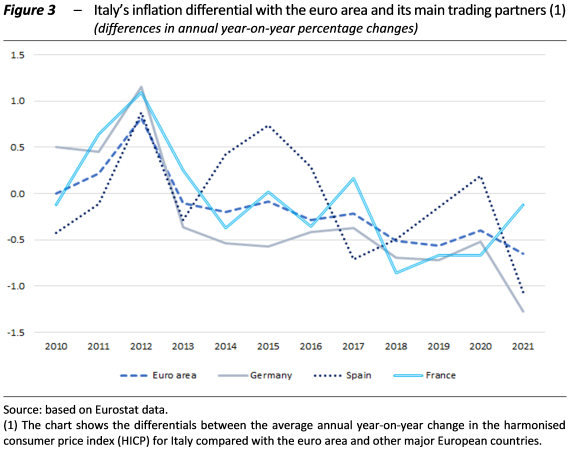 The preliminary figures for 2021 factor in the quarter-on-quarter increase in GDP in the last quarter (0.6 per cent according to the preliminary Istat estimate), on the basis of which GDP increased by 6.5 per cent in 2021 (Table 1). Economic activity is expected to continue to expand this year, with a rise of 3.9 per cent. After a very weak first quarter due to the resurgence of the pandemic, growth is expected to strengthen from the spring, taking advantage of the progressive improvement in the health situation. By the end of the first half, activity would reach the levels registered at the end of 2019. In 2023, GDP growth is forecast to continue to gradually normalise, slowing to 1.9 per cent, due in part to the less expansionary stance of economic policies.

The forecasts assume the full implementation of the NRRP investment programmes agreed at the EU level, as well as the full effectiveness of the ECB’s monetary policy measures, taking account of their gradually normalisation starting this year. The stimulus measures financed with European funds and with the 2022 budget measures would boost GDP by about 3 percentage points over the 2021-2023 period. 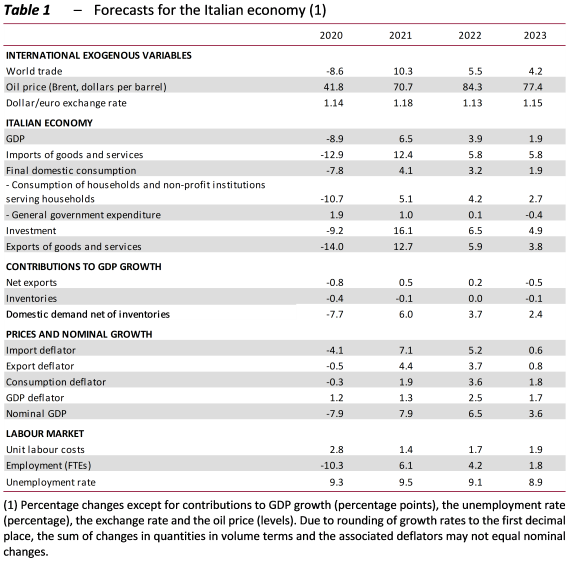 Compared with the macroeconomic scenario formulated by the PBO in October on the occasion of the endorsement exercise for the forecasts contained in the 2021 Update, the annual changes have been significantly modified, but with only limited impacts on levels at the end of the forecast horizon. An increase of seven-tenths of a percentage point in GDP growth in 2021 was offset by a downward correction of nearly 1 percentage point in 2022-2023.

…. and the potential risks – The outlook is exposed to a variety of risks, mainly tilted downwards for growth and upwards for inflation.

The forecast for the early months of this year is based on the assumption that the current wave of infections does not place further strains on the health system, for which a gradual easing of restrictions would be possible during the year. In the medium term, the international economic environment delineated by the major forecasters appears to be relatively favourable, but if the frictions in logistics and bottlenecks in supply, as well as the jump in energy costs, were to recede more slowly than expected, the pace of Italy’s foreign demand growth would be threatened. Another risk is associated with the assumption of full, timely and efficient use by Italy of the European funds available through the NGEU programme in order to implement the investment projects envisaged under the NRRP.

At the same time, a more favourable medium-term scenario cannot be ruled out, as the large amount of savings accumulated for precautionary purposes by households during the recession would foster a faster recovery in consumer spending if uncertainty were to abate on a more lasting basis. However, the current increase in inflation could be more persistent than predicted by the monetary authorities. In this case, the increase in prices would erode the purchasing power of households and could prompt an additional reaction from central banks.

Over a longer time horizon, the stance of economic policies and the risk aversion of the markets will be crucial. When the pandemic is eradicated and the world economy returns to steady growth, it will be necessary to reduce the accumulated financial imbalances. Any mismatches in the timing of the recoveries of the various countries could affect the risk premiums demanded by markets for economies with particularly high levels of debt, with repercussions on financial stability and, therefore, household and business spending decisions. For the countries of the European Union, these risks will also depend on the new fiscal governance, negotiations for which are under way.

As regards price dynamics, the risks are mainly upwards, especially for next year. The markets for energy commodities are very volatile at this stage, so the assumptions of a decline in prices in 2023 could rapidly prove to be outdated. In addition, bottlenecks in the supply of intermediate goods and increases in the cost of transport services, which many analysts consider temporary, could be more persistent than expected.