Publication of Flash no. 3/2021 “Changes in medium-long term projections of pension expenditure in Italy”

UPB Flash n. 3/2021 “Changes in medium-long term projections of pension expenditure in Italy” summarizes the main results of the latest AWG projections and compares them with other projection exercises. As of today, available scenarios allow to carry out this comparison along two dimensions: an inter-temporal one, between projections conducted by the Working Group on Ageing Populations and Sustainability (AWG) in different years (Annual Report 2018 and Annual Report 2021); an inter-institutional one, including projections conducted by the AWG and the State General Accounting Office (RGS), with their own independent hypotheses developed in the same period (Spring 2020). The inter-temporal comparison allows the assessment of the changes in pension expenditure projections occurred over a relatively short period of time and due, on the one hand, to some minor legislative changes and, on the other, to changes in both short-term macroeconomic forecasts and medium-long term macroeconomic and demographic projections. Conversely, the inter-institutional comparison sheds a light on the different views that the AWG and the RGS have on the future evolution of pension expenditure, as a result of different macroeconomic and demographic scenarios.

More in detail, the AWG baseline scenario (“AWG-2021”) is based on assumptions incorporating the effects of the COVID-19 crisis only in the short term, while for the medium-long term it relies on those embedded in the European Commission Spring Forecasts published in May 2020. AWG-2021 is compared with: 1) the previous baseline scenario by AWG (“AWG-2018”); 2) the AWG-2021 modified and updated to be included in the 2021 Economic and Financial Document (EFD) for the purposes of the analysis of the medium-long term sustainability of public finances (“AWG-in-2021 EFD”); 3) the national baseline scenario also included in the 2021 EFD, with RGS macroeconomic and demographic assumptions (“RGS-in-2021 EFD”); 4) the national baseline scenario published by RGS in July 2020 within the annual report on medium-long term trends of the pension, health and long-term systems (“RGS-2020”).

Figure 1 (charts a), b), c)) shows the evolution of the pension expenditure to GDP ratio from 2015 to 2070 resulting from the five different basic scenarios. All curves converge towards a similar long-term pension expenditure to GDP ratio, ranging between 13 and 14 per cent in 2070, and share some salient common characteristics. In particular, the continuous, albeit differentiated, increase in the ratio until 2035-2045 is mainly driven by the retirement of the so called “baby boomer” cohorts with the calculation of allowances still based for a significant share on past wages. Subsequently, the progressive disappearance of these cohorts and the concomitant gradual transition to a fully-fledged notional accumulation system, based on contributions paid along the career, explains the reversal of the trend and the reduction in the expenditure to GDP ratio. 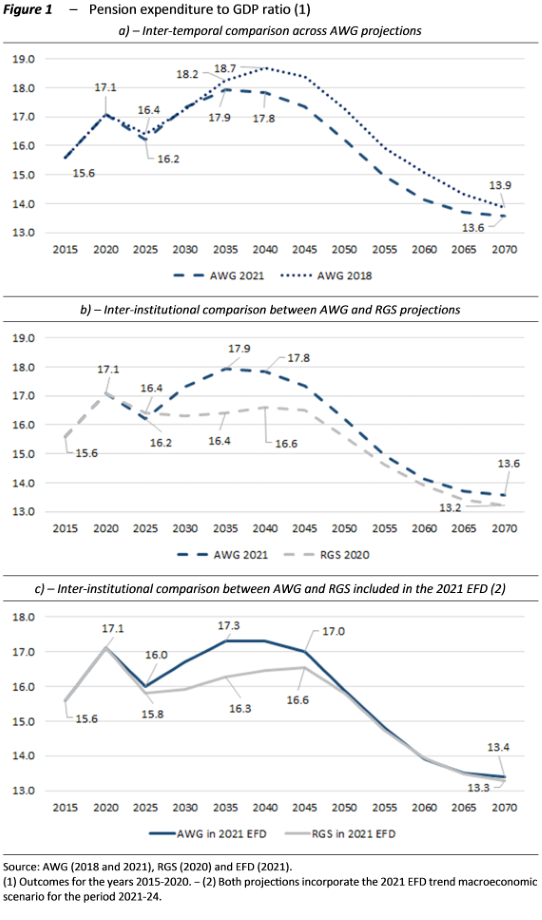 In the inter-institutional comparison between projections with assumptions formulated in the first part of 2020 (fig. 1, chart b)), RGS-2020 reports a lower pension expenditure to GDP ratio compared to AWG-2021 from 2025 onwards. The difference reaches 1.5 percentage points in 2035 (the same year AWG-2021 reaches its peak of 17.9 per cent) and then gradually decreases to 0.6 points in 2050 and becomes negligible thereafter. These differences can be entirely ascribed to the underlying demographic and macroeconomic assumptions.

The second inter-institutional comparison (fig. 1, chart c)) is similar to the previous one with some differences which, however, do not alter the relative position of the two projections. In fact, compared to the assumptions of AWG-2021 and RGS-2020, AWG-in-2021 EFD and RGS-in-2021 EFD keep the medium-long term macroeconomic framework unchanged (in particular, the potential GDP), but incorporate outturn data for 2020 and the trend macroeconomic forecasts for the years 2021-24 of the 2021 EFD. These forecasts include a preliminary assessment of plausible short-term effects on growth of the National Recovery and Resilience Plan (NRRP), while prudently omit to consider possible permanent effects (for example on the medium-long term GDP dynamics). In AWG-in-2021 EFD, the pension expenditure to GDP ratio decreases from 17.1 per cent in 2020 to 16.0 per cent in 2025, and then moves along a growth trend that culminates in the 17.3 per cent in 2035, thereafter remaining substantially stable until 2040, and subsequently beginning a long gradual convergence towards 13.4 per cent by 2070. According to RGS-in-2021 EFD, in 2025 the expenditure ratio is 15.8 per cent, then it starts a rising trend that culminates in the 16.6 per cent of 2045, thereafter gradually converging towards 13.3 per cent in 2070. In 2025, AWG-in-2021 EFD is about 0.2 percentage points above RGS-in-2021 EFD; this gap widens up to 1 percentage point in 2035 and then slowly begins to shrink until roughly 0.4 points in 2045 and becomes negligible from 2050 onwards. Differences between these two institutional sources of projections, with the AWG more pessimistic and the RGS more optimistic, can be explained by the technical specifications of assumptions used in the medium-long term, mainly those concerning labour market and productivity growth.

To give a preliminary perception of the possible long-term consequences of the pandemic crisis, the new Ageing Report also contains two sensitivity scenarios, the first with a slower recovery (“lagged-recovery”) and the second with a structural reduction of potential growth (“adverse-structural”). In this Flash, these two new ad hoc sensitivity scenarios are presented together with a third one, selected from the range of sensitivity analysis developed in the previous projection exercises, which considers the possibility of a more sustained total factor productivity dynamics (“higher-TFP-growth”).

This Flash shows the high degree of sensitivity of pension expenditure projections to the different medium-long term macroeconomic assumptions of the two Institutions, with the AWG generally more pessimistic than RGS especially during the two decades 2030-2050. Choosing the appropriate set of assumptions is in general tricky because of the long projection horizon and the uncertainty surrounding long-term effects of policy choices on the macroeconomic scenario. In the current situation, the difficulty is even amplified by the possible long-term consequences of COVID-19 crisis and the uncertainty surrounding the efficacy of both national and European-coordinated recovery policies, and in particular those connected with the implementation of the NRRP. Projections available so far have not yet been able to fully take them into account.

Next rounds of projections (by AWG and RGS) will face the difficult task of updating the entire set of assumptions, both demographic and macroeconomic, to take into account, in the most realistic way, any legacies of the COVID-19 crisis.