Publication of Focus Paper no. 1/2022 “A retrospective assessment of the macroeconomic forecasts of the MEF and the PBO”

The Focus Paper “A retrospective assessment of the macroeconomic forecasts of the MEF and the PBO” conducts a retrospective analysis of the forecasts contained in the Government’s planning documents – the Economic and Financial Document (EFD) and the Update to the Economic and Financial Document (Update) – in the period in which the Parliamentary Budget Office (PBO) carried out the endorsement exercises, comparing them with those for the previous period and the projections formulated by other forecasters.

The objective of the Focus is to assess the quality of government forecasts, with regard both to the possible optimism and to the order of magnitude of the forecast errors. With this in mind, the analysis is accompanied by a number of sensitivity checks of the results with respect to various factors, such as the specific error indicator or differences in the releases of the official national accounts data. A comparison is also conducted against the independent forecasts of private forecasters and with respect to the experience of other European countries.

The analysis reveals that the optimism and errors in the forecasts for the main macroeconomic aggregates contained in the Italian planning documents have decreased on average since the establishment of the PBO.

The average error, which represents the bias of the forecasts, as shown in Figure 1, was around 1.5 starting from year T+1, i.e., precisely the time horizon over which the macroeconomic forecasts have the greatest impact on the public finance projections (the forecasts for the government accounts in the current year benefit from monitoring tools in expenditures and revenues) and are most relevant for economic policy purposes. Over the period in which the PBO has operated, the forecasts of the Ministry of Economy and Finance (MEF) have become more balanced, especially for the real GDP, and are slightly pessimistic for the current year. A non-negligible degree of optimism for nominal GDP remains, larger as the forecast horizon widens, partly reflecting the assumptions concerning the safeguard clauses (the planned increase in VAT rates) adopted in the public finance projections. The accuracy of the forecasts, referring to the size of the errors, also improved in the second half of the last decade, although there is still room for further improvement on the nominal GDP projections, especially over longer time horizons. 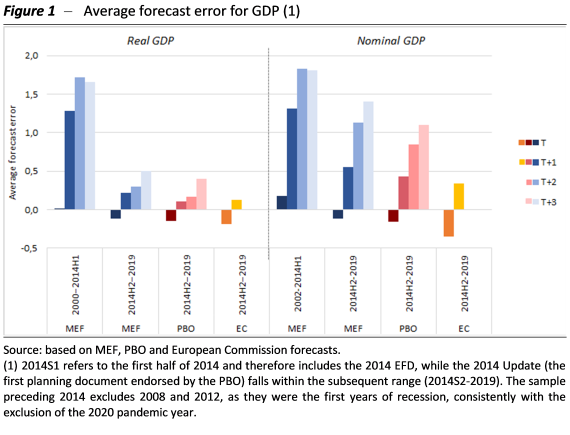 The PBO forecasts have been slightly more cautious than those of the MEF, similar to those produced by the European Commission, which however are characterised by excessive pessimism for the current year.

In the case of the macroeconomic scenarios of the Government and the PBO, the similarity between the forecasts may reflect specific procedural factors. On the one hand, the endorsement procedure is structured so that the Government’s preliminary forecasts can incorporate the observations of the PBO, bringing the MEF scenario closer to that of the panel of independent forecasters (CER, Oxford Economics, Ref.ricerche and Prometeia) that supports the PBO. On the other hand, the projections of the PBO tend to converge towards those of the MEF because the main international exogenous variables, as well as the budget packages, are defined by the MEF and are adopted by the PBO panel forecasters. This affects, for example, the forecasts for price variables in the last decade, which was characterised by the use of the safeguard clauses. Finally, since the macroeconomic forecasting calendar adopted by the MEF and the PBO is the same, the two scenarios incorporate equivalent economic information on the cyclical developments, thus diverging from forecasts that incorporate more or less recent data.

The Focus also offers a comparison between official forecasts and those produced by private analysts, with the gap between them narrowing in the period in which the PBO has operated. It also conducts a number of analyses of robustness and presents the main diagnostics of the forecasts errors of other European governments.

In interpreting the descriptive evidence, it must be borne in mind that the number of available observations is small, partly reflecting the need to exclude the years affected by anomalous shocks, such as the pandemic, from the sample. This means that more refined inferential statistical assessments are not currently possible. A sounder analysis could be performed in the future, when longer time series become available.