Publication of Focus Paper no. 2/2022 “The 2022 budget package: an analysis of the version approved by Parliament”

The Focus Paper “The 2022 budget package: an analysis of the version approved by Parliament” (in Italian) briefly examines the final versions of the 2022 Budget Act, approved by Parliament on 30 December 2021, and Decree Law 146/2021 (the Tax Decree) containing urgent measures in economic and fiscal matters, to safeguard work and for urgent needs.

Looking at the components of the budget by thematic area, in 2022 about 70 per cent of the expansionary impact appears to be concentrated in four areas. The most significant for the first year of the planning period covered by the budget is “Sustainable infrastructure and mobility, ecological transition, energy and seismic resilience”, which also includes measures intended to containing energy prices, which are currently limited to 2022. The other areas are “work, families and social policies”, “revenue provisions” and “growth and investment” (Figure 1). 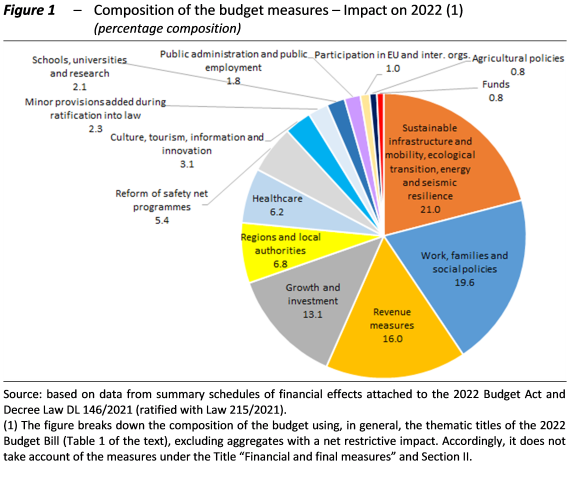 Compared with the initial versions of the legislation, the amendments have produced marginal improvements in the balance relative to the trend scenario, with variations of less than €100 million per year in 2022 and 2024 and about €300 million in 2023, with significant reductions in both net revenue and net expenditure (Table 1), which to a large extent reflect accounting effects. More specifically, the use of the resources allocated to fund the so-called tax wedge bonus (the supplementary per-month €100 tax credit for compensation of payroll employees and equivalent workers below a certain income threshold, referred to in Article 1 of Decree Law 3/2020) to finance part of the costs associated with the revision of the structure of personal income taxation entailed the revision of the accounting treatment of the change in the general government accounts from an increase in expenditure on social benefits to a reduction in revenue from direct taxes (€9.1 billion per year).

The main changes made during the parliamentary process include: the bringing forward of part of the tax reform, for which initially only the Fund for the reduction of the tax burden had been established, with the revision of the structure of personal income tax through changes in rates, brackets, tax credits and the tax wedge bonus and the exemption from IRAP (regional business tax) for self-employed workers engaged in commercial activities or exercising arts and professions; the grant for 2022 of an exemption on the share of social security contributions payable by workers in payroll employment positions; and measures to contain the impact of the increase in natural gas prices. Various detailed changes have been made to the rules governing tax concessions in the building sector as well as those relating to public employment. Finally, numerous small-scale measures (about 200) have been introduced, financed with resources from existing funds.