Publication of Focus Paper no. 3/2020 “An overview of the Relief decrees”

The Focus Paper (in Italian) analyses the measures envisaged under the various “Relief” decrees, as resulting from the parliamentary process of ratifying Decree Law 137/2020, incorporating as amendments the provisions of the 2nd Relief Decree (Decree Law 149/2020), the 3rd Relief Decree (Decree Law 154/2020) and the 4th Relief Decree (Decree Law 157/2020). The resurgence of the pandemic beginning at the end of the summer necessitated the adoption of urgent measures to contain the spread of the disease and manage the emergency (the various prime ministerial decrees that have been issued in succession since 13 October), together with measures to support the income of workers and households and provide relief to firms operating in the sectors most directly or indirectly affected by the restrictions (the four Relief decrees).

The Focus Paper illustrates the financial effects of the Relief decrees and reviews some of the main measures envisaged in them: grants and other support measures for businesses; the extension of wage supplementation programmes and additional one-off allowances; and the measures concerning the Emergency Income and healthcare.

Overall, the Relief decrees increase general government net borrowing by €13.4 billion in 2020 (equal to 0.8 percentage points of GDP), while they have a barely positive or zero impact in subsequent years (Table 1). 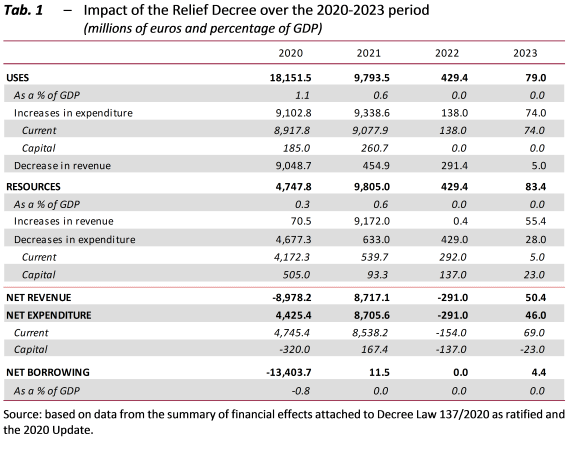 To support firms, the Relief decrees introduced a new grant based on and expanding that provided for under the May decree for persons holding VAT registration numbers whose prevalent business is classified among the 164 specific economic subsectors identified beginning with the restrictions imposed with the Prime Ministerial Decrees of 24 October and 3 November and on the basis of orders issued by the Minister of Health. The amount of the new grant is based on the loss of turnover recorded in April 2020 compared to the corresponding month of 2019, and is differentiated by the volume of turnover and the burden of the restrictions incurred. The rapid issue of subsequent decrees made it possible to expand and strengthen economic support in parallel with the tightening of restrictions and the extension of their territorial scope.

Table 2 gives a breakdown by scaling coefficient of the distribution of the subsectors receiving grants within each sector of activity and the maximum number of persons potentially eligible for the grant (without taking account of possible non-eligibility based on the requirement that beneficiaries must have experienced a reduction in turnover of at least one third), identified using data drawn from 2018 VAT returns (the most recent year available).

With reference to the restrictions  adopted only for red zones, 58 subsectors in the retail industry are eligible for the grant (52 subsectors out of 290 total, representing 19.5 per cent of firms in the sector and 7 per cent of turnover), as are businesses engaged in other personal service activities (6 subsectors out of 42, representing 23.5 and 19.2 per cent, respectively, of the number of businesses and sector turnover). A scaling coefficient of 200 per cent is also applied to these subsectors, with a loss replacement rate of 20 and 40 per cent depending on the size of the firm. 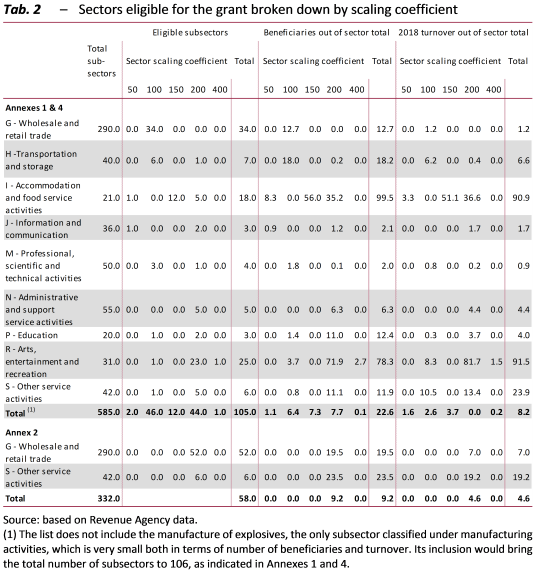 Other aid for businesses includes support for some of the sectors most affected by the restrictive measures (cultural and recreational activities, sports activities, the trade fair sector), both through the refinancing of funds already established with the decrees issued in previous months and the establishment of new funds. Finally, the Relief decrees provide for additional suspensions and exemptions from taxes, social security contributions and premiums for compulsory insurance beyond those already established starting from March 2020 with the anti-crisis decrees. Measures of a mainly sectoral nature are accompanied by provisions specifically targeted at businesses with a tax domicile or operational headquarters in regions classified as maximum or high severity areas (red and orange zones, respectively).

To support the labour market and the incomes of workers and households who are feeling the effects of the crisis, even if they are not directly affected by the restrictions imposed with the Prime Minister’s Decrees of 24 October and 3 November 2020, a series of measures adopted during the first wave of the pandemic have been renewed and extended. The decrees essentially extend by a few weeks (until 31 January 2021) the same “package” of measures to protect worker income and support employment begun in March and completed in August: wage supplementation for COVID-19 reasons, temporary contribution relief for employers who do not have recourse to the wage supplementation programme, a moratorium of firings (whether individual or collective) for economic reasons. A further two months of one-off allowances have also been granted to most workers (the self-employed and those belonging to marginal categories of payroll employment) who had already received those introduced or extended by the August decree, as have an additional two months of Emergency Income benefits. With regard to the latter, the final figures for May-November confirm that the use of the Emergency Income programme was well below expectations. It did enable some persons not eligible for the Citizenship Income programme to receive some support. However, the concomitant increase in recourse to the latter suggests that the two programmes overlapped to some degree.

The measures targeted at the healthcare sector are mainly aimed at financing the purchase and distribution of anti-COVID-19 pharmaceuticals and at enhancing the capacity to identify and trace COVID-19 cases in order to counter the spread of the pandemic and limit its economic consequences. Finally, the decree returns to the issue, already addressed in Decree Law 34/2020, concerning the remuneration of private healthcare facilities accredited with the NHS that have suspended operations during the emergency, providing for loans to cover fixed costs, among other things.