Publication of Focus Paper no. 4/2022 “The NRRP and healthcare: goals, resources and milestones achieved”

This Focus Paper (in Italian) offers an overview of the NRRP measures envisaged within its Health Mission, which is designed to strengthen the Italian healthcare system. The Focus analyses a number of financial aspects in greater detail, namely the distribution of resources across the country and the issue of funding current expenditure to operate the new or enhanced services that the NRRP will make available. In addition, the objectives planned for the first half of 2022, all of which were achieved on schedule, are briefly examined.

The inclusion of a Mission focused on healthcare in the NRRP reflects the need to respond to critical issues that emerged in the wake of the health emergency. COVID-19 helped exacerbate the strains that were already running through the National Health Service (NHS), despite the fact that certain indicators of effectiveness appeared favourable and public healthcare expenditure was below the European average as a proportion of GDP. In particular, the problems associated with the inadequacy of territorial healthcare assistance, geographical imbalances, bottlenecks in the supply of hospital services (with the overcrowding of emergency services), a scarcity of personnel in certain professional categories, the neglect of prevention and the weak public commitment to research.

The NRRP dedicates €15.63 billion to the Health mission, of which nearly €3 billion for existing projects, €9.6 billion for new projects and €3 billion from the Development and Cohesion Fund (DCF). In addition, a further €2.89 billion are available through the Complementary Fund (CoF), bringing total funding to €18.5 billion. In addition, other resources should be available to the NHS, such as from REACT-EU (about €1.7 billion) and the National Operative Programme (NOP) for health (€625 million) (Table 1).

The NRRP measures appear consistent with the general approach on the reorganisation of health systems in European countries, which includes the rationalisation of the hospital sector and the strengthening of local healthcare assistance and health prevention and promotion. The basic approach of the NRRP programmes is represented on the one hand by a strengthening of territorial healthcare assistance – with the specification of structural, organisational and technological standards and the new structure of prevention arrangements, and with the creation of new facilities, including short-stay units – and the strengthening of home care (the first Component of the Health Mission, for which €7 billion of NRRP funding and €500 million of CoF funding have been allocated). 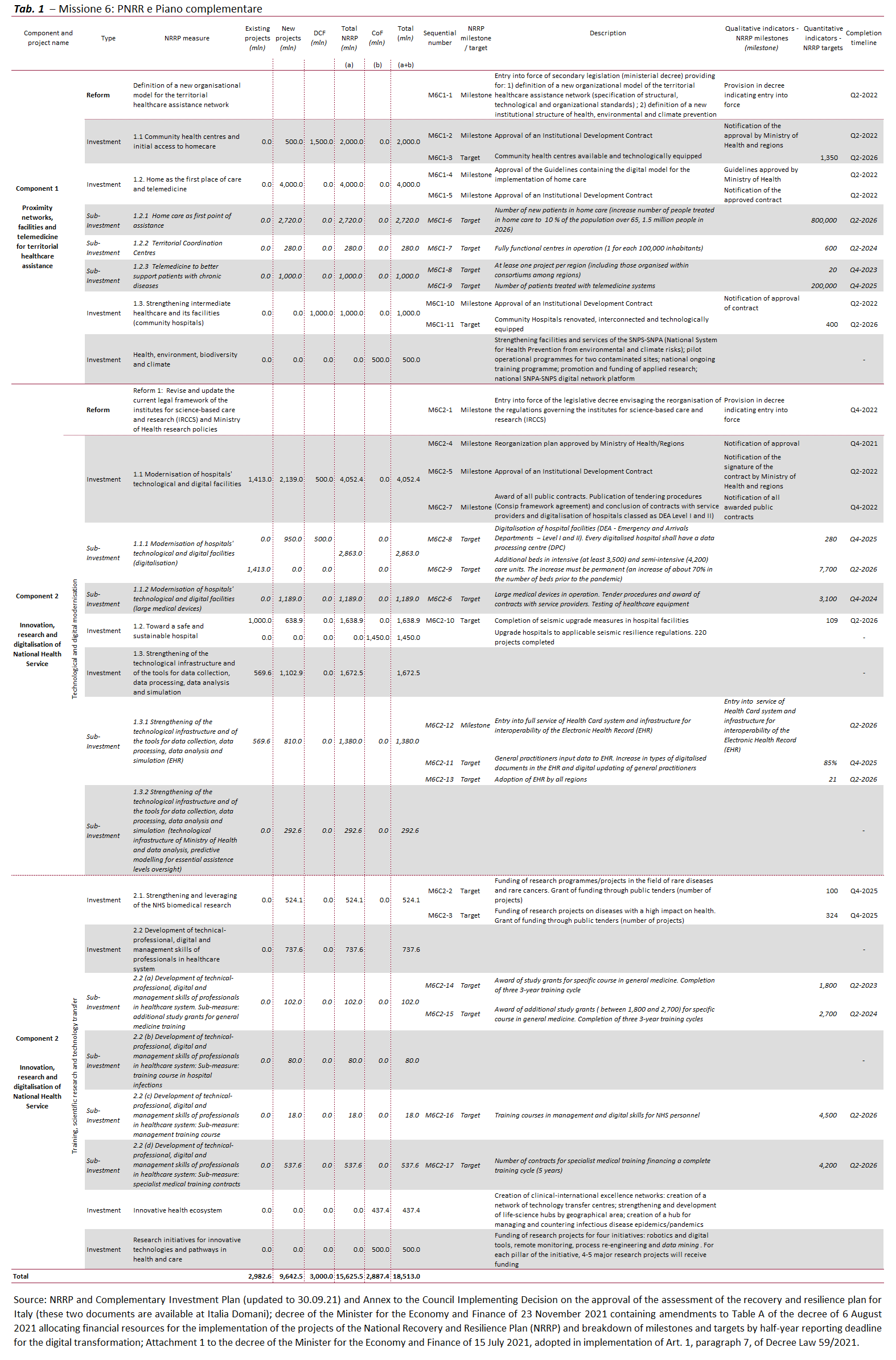 On the other hand, funding has been committed for the reorganisation of the network of Institutes for science-based care and research (IRCCS), the modernisation of hospitals – with new technologies, digitisation, seismic upgrading and a focus on high-intensity care services – and the improvement of research and training capacities (second Component of the Health Mission, with some €8.6 billion in NRRP funding and €2.4 billion from the CoF).

There are a number of critical issues to be addressed in order to implement the projects.

First, the discussions between the levels of government on the steps involved in the implementation of the NRRP have often raised concerns about the difficulty of meeting the scheduled deadlines. On the one hand, this has prompted an effort to rigorously specify timelines and implement processes to counter inertia and delays and, on the other, it has contributed to making the process of achieving the intergovernmental agreements underlying the various actions a complex and somewhat tortuous endeavour.

Second, another sensitive aspect is the effort to strike a balance between binding national standards across the country and regional autonomy. In the case of the territorial health care reform, for example, these problems were laid bare by the lack of agreement within the State-Regions Conference and the difficulty of balancing the need to clearly circumscribe the obligations of the regions with the risk of weakening the Regulation on territorial healthcare assistance models and standards. As a consequence, part of this Regulation has not been given prescriptive power. However, it is to be hoped that the Regions will also take account of the approaches delineated in the descriptive/exhortative portion of the document, which among other things in many cases makes reference to the provisions of existing legislation, which require compliance in any case. While some aspects of the reform have already been delineated, in other cases the task of defining the standards does not seem to have been completed. These open issues include the role of primary care, which must be made consistent with the overall design of healthcare services, through the regulation of the participation of general practitioners in the new healthcare system.

Third, there is uncertainty about the current resources available to operate the health services upgraded with the planned investments, especially once the funding secured by the NRRP is depleted and the new facilities are operational. The cost estimates often appear to be mainly based on the available resources, and part of the costs would be covered with NHS funding made available by the cost savings generated by the reorganisation of the system and by technological and digital innovation (Table 2). Even if the NHS reforms will plausibly improve efficiency, counting on future cost savings can be imprudent, especially in a sector, such as healthcare, in which technical progress is often accompanied by an increase in costs. Furthermore, it is difficult to strengthen the system further through rationalisation, especially after the past efforts already made in this area. The increase in NHS funding in the next few years enacted with the 2022 Budget Act will partly be allocated to upgrading the system (starting with €1.015 billion per year at regime for territorial healthcare assistance). However, other costs connected with the renewal of staff collective bargaining agreements and the use of the new essential care standards will also have to be addressed. Looking specifically at personnel, the related expenditure is also constrained by the ceilings imposed on such spending, even if these were raised with the 2022 Budget Act. It is desirable that the new territorial healthcare assistance standards facilitate the determination of staffing needs by the regions, required by various laws and, most recently, by the Budget Act. This would help banish concerns about the ability of the regions to govern this expenditure item. 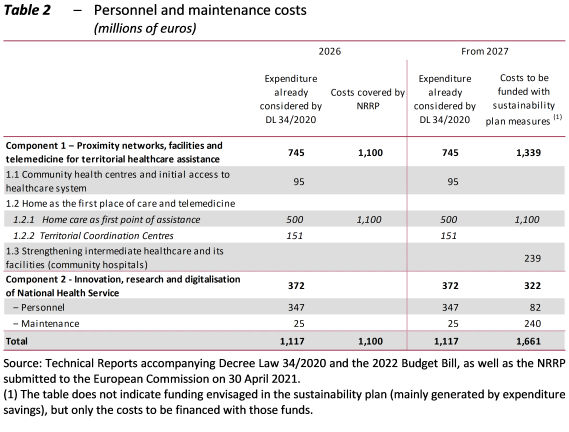 Faced with these critical issues, the approach adopted so far has been to reconcile compliance with the deadlines of the NRRP with postponement of solutions to certain problems, including major issues, for subsequent resolution through the dialogue between levels of government, also bearing in mind the uncertainties concerning the availability of current funding. Resources may also be increased over time, if budget resources can be found, in order to ensure consistency between capital and current expenditure.

The NRRP investments could help smooth out some of the issues faced by the Italian healthcare system, especially with regard to territorial healthcare, but other problems will have to be addressed differently.

As regards the infrastructure rebalancing, for example, in view of the considerable differences among regional health services (RHSs), the criteria for the distribution and allocation of funding appear to be quite rigid, even if they are designed to support weaker areas with the minimum expenditure constraint for Southern Italy (40 per cent), which has been complied with so far. Applying a fixed percentage to all measures does not appear compatible with the results of the surveys of starting conditions and the infrastructure requirements identified in the various territorial areas. One example of this is the case of large medical devices: differences emerge from a comparison of the percentage allotments of the related funding and the distribution of the needs for investments in high and medium technology electro-medical equipment identified in a survey conducted in 2020: two Southern regions (Campania and Puglia) obtain a significant advantage with the allotment, while two from the Centre (Umbria and Lazio) are disadvantaged (Table 3). However, it is possible that more recent and accurately targeted surveys for NRRP investments will produce results more consistent with the allocation established by the decree. 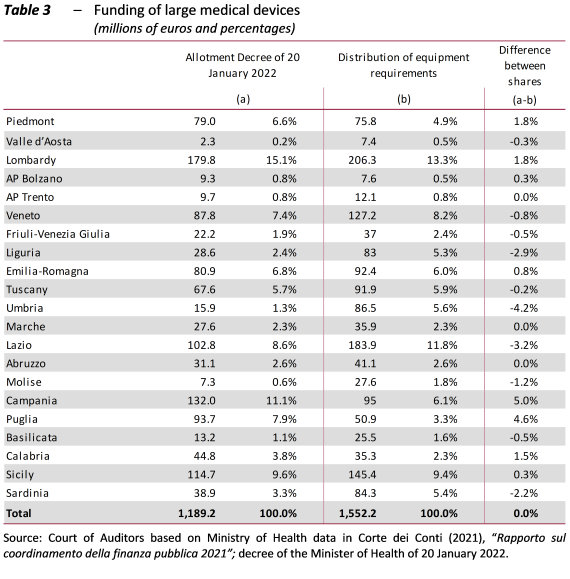 Furthermore, the NRRP does not resolve the issue of staff shortages, as it is not the appropriate tool for funding ongoing current expenditure, although it could produce greater clarity about the related staffing requirements, thanks to the definition of the new standards. Such issues must be addressed (as has already happened in part) through the financial planning conducted for the Budget Act.

Other critical issues, such as those concerning emergency services, are primarily addressed by the NRRP by relying on technological improvements and alleviating pressure by ensuring efficient territorial healthcare assistance. Emergency room problems are significant and urgent, and therefore will probably also need to be addressed using tools other than the NRRP, eliminating personnel shortfalls as soon as possible.

Nevertheless, the NRRP represents an important opportunity to increase investment in healthcare and stimulate the necessary reorganisation of the system.