Publication of Focus Paper no. 5/2022 “A review of the budget strategies in the 2022 Stability and Convergence Programmes of EU countries”

Drawing on the Recommendations and the set of indicators used by the European Commission to assess the Stability and Convergence Programmes (SCPs), the Focus Paper “A review of budget strategies in the 2022 Stability and Convergence Programmes of EU countries” (in Italian) (also available in interactive form at https://en.upbilancio.it/comparison-between-the-2022-stability-and-convergence-programmes/) (in English) offers a comparison of public finance outcomes and budget strategies of EU countries.

In the “2022 European Semester – Spring Package” Communication, the European Commission provided guidelines on the overall strategy for the formulation of the country-specific recommendations and on the fiscal stance of national policies. Primarily, given the growing uncertainty stemming from the conflict in Ukraine, the downside risks to the economic outlook, the rise in energy prices and the supply chain bottlenecks, the Commission concluded that an extension of the general escape clause to 2023 was warranted. In addition, the European Commission proposed that the more or less expansionary fiscal stance stemming from national policies should be differentiated in relation to the debt/GDP ratios of Member States. Finally, it put forward recommendations concerning structural reforms of national budgetary frameworks, the implementation of the National Recovery and Resilience Plans (NRRPs), energy policy and outstanding and/or newly emerging structural challenges.

The first section of the Focus paper provides a comparison, for all EU countries, of the main fiscal indicators for 2021, 2022 and 2023. The following one describes the fiscal stance indicator used by the European Commission, while the third section focuses on the budget strategies of the main euro area economies – namely France, Germany and Spain – which are also briefly described with regard to Italy.

An analysis of the SCPs and the main public finance indicators contained therein (Table 1) highlights a number of key elements. 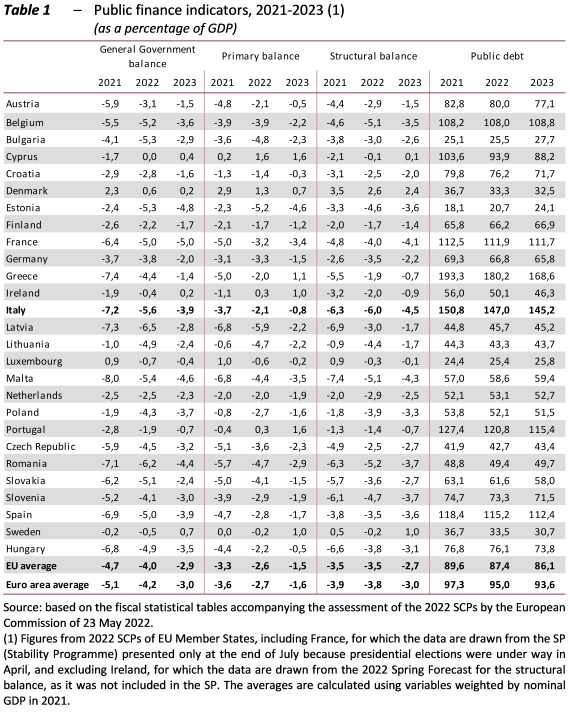 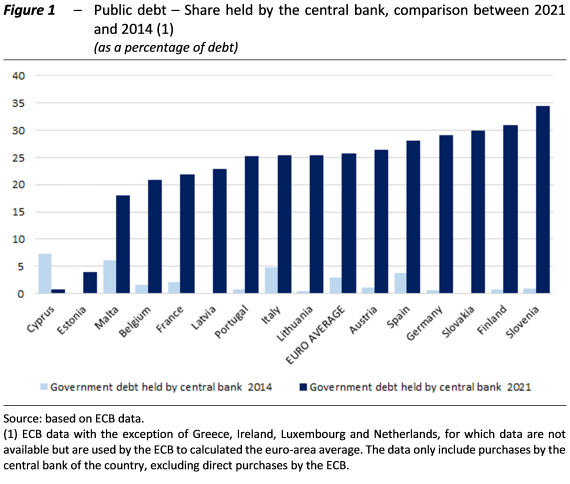 In light of the European Semester Communication and the figures on the fiscal stance, the European Council’s fiscal policy recommendations differ depending on whether or not a Member State is considered a high-debt country. The Council recommends that high-debt countries, such as Italy, France and Spain, ensure prudent fiscal policy in 2023, in particular by limiting the growth of nationally-financed primary current expenditure below medium-term potential output growth. For Germany, a low-debt country, the Council recommends that in 2023 the growth of nationally-financed current expenditure should be in line with an overall neutral policy stance. For all countries, it recommends that fiscal policy should take into account temporary and targeted support to households and firms most vulnerable to energy price hikes and to people fleeing the conflict in Ukraine, while standing ready to adjust current spending to the evolving situation.