Publication of Focus Paper no. 6/2022 “The impact of the pandemic on hospital finances”

The Focus (in Italian) analyses the effects of COVID-19 on the finances of Italian Hospital Authorities (HA), highlighting the diversity of the impact across the different areas of the country. The study examines 72 hospitals (those operating continuously from 2015 to 2021), comparing their performance in the two-year period just ended with that in the previous five years.

Deeper in the red

The picture that emerges from an analysis of the data (especially evident if instead of considering profit or loss for the year we look at the difference between costs and revenues determined as remuneration of HA activity) shows a deterioration in hospital accounts due both to a decline in revenues and an increase in costs. In absolute value, the cost-revenue imbalance of Italian hospitals went from around €360 million in 2019 to almost €2.6 billion in 2020 and more than €3.2 billion in 2021. In 2020, deterioration was most acute in the South. By contrast, in 2021 the gap increased only slightly in the South and the North, compared with a more pronounced rise in the Centre (Figure 1). 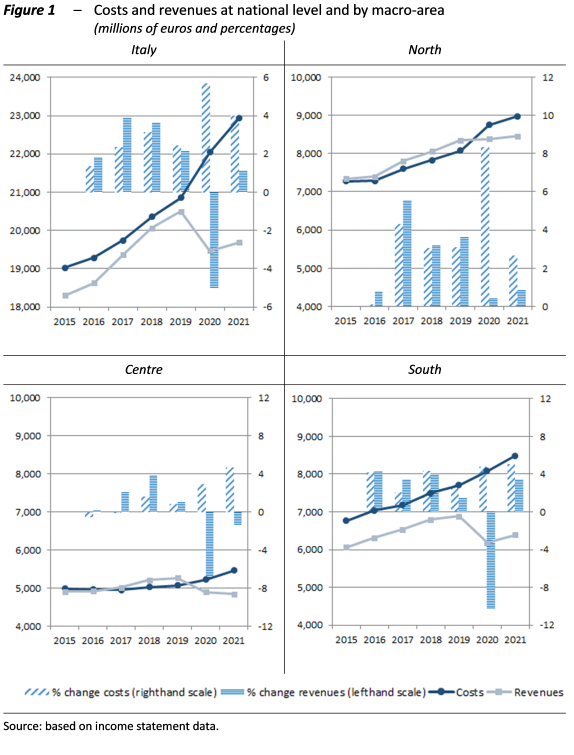 The COVID-19 impact on revenues and costs

In 2020, revenues fell by 5 per cent year-on-year, while costs increased by 5.7 per cent. In 2021, the revenue side registered a modest recovery (+1.1 per cent), while costs posted a further increase of 4 per cent.

In 2020, revenues decreased mainly as a consequence of the contraction in activity due to the health emergency. The South experienced the greatest reduction in revenues from services (-13.3 per cent), followed by the Centre (-9.8 per cent) and the North (-4.4 per cent). In 2021, however, the Centre registered the weakest recovery (+0.8 per cent), while the South achieved the strongest growth (+5.3 per cent) (Figure 2). 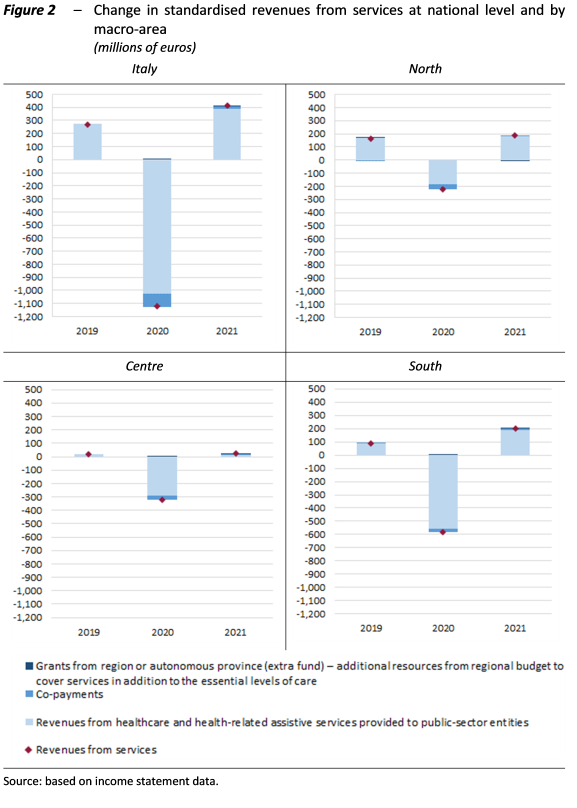 At the national level, the reduction in 2020 essentially reflected the decline in revenues from hospitalisations (-€800 million) and outpatient services (-€200 million). Almost half of the decrease occurred in the South, which experienced the greatest decline in service provision.

In 2020, income from services provided privately by physicians using hospital facilities (intramoenia) decreased by more than €100 million as a result of the pandemic emergency, which also impacted the volume of such services provided. In 2021 the resumption of intramoenia activities was probably boosted by the measures adopted to reduce waiting lists.

… and why costs increased 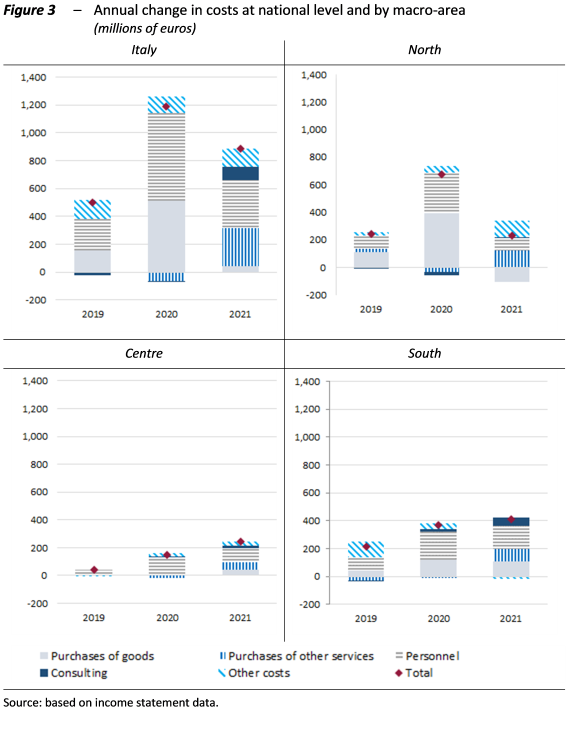 However, expenditure on non-employee personnel (consultants, contract work associates, temporary workers, reimbursements to seconded personnel, IRAP – regional business tax – on contract work associates’ remuneration) fell by less than 2 per cent in 2020 at the national level, but rose by almost 23 per cent in 2021, led by the South (+38 per cent) and the Centre (+28 per cent).

Costs for the purchase of goods increased by 8.6 per cent in 2020, mainly due to the change registered in the North (just under 17 per cent), although this was followed by a decline in 2021.

Purchases of services other than consulting and allowances paid to university staff decreased slightly in 2020 in all macro-areas (-2.2 per cent nationally, or just over €60 million in absolute value), but increased significantly in 2021 (+9.6 per cent, or €270 million), reflecting the recovery in activity.

The expansion of NHS personnel accelerates with the pandemic

Compared with the overall situation of the NHS, which suffered a significant contraction in the number of permanent employees between 2008 and 2017 (-40,000) as a result of expenditure restraint measures, followed by a modest recovery in 2018-2019 as those restrictions were eased somewhat, the number of permanent hospital employees had already begun to rise slightly in 2016, and 2020 saw a more robust increase of 5.5 per cent, corresponding to some 8,000 more employees.

While between 2015 and 2019 staffing had especially been strengthened in the South, in 2020 employment mainly increased in the Centre and North (with growth rates of more than 6 per cent, compared with 4 per cent in the South). 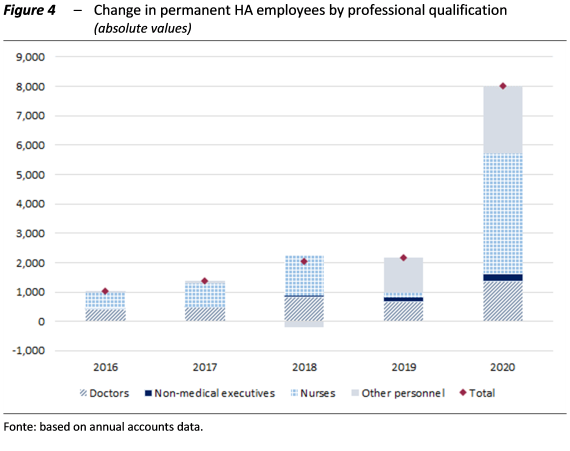 With regard to flexible personnel (fixed-term contracts, community service workers), whose numbers had decreased in previous years thanks in part to transformation of temporary employment arrangements into permanent positions, 2020 registered a sharp increase, at about 30 per cent (54 per cent in the North, 34 per cent in the Centre and 19 per cent in the South), corresponding to more than 2,800 annual work units per year. Once again, nurses represent the category recording the greatest increase, not only in absolute value (+1,392) but also in percentage terms (+35 per cent).

Finally, external engagements and contract work arrangements, which past efforts had sought to limit, increased in 2020, with active contracts rising by about 1,800 (+31.7 per cent), reflecting the roll-out of emergency measures.