According to the October Report on Recent Economic Developments, the progress achieved in vaccination campaigns, especially among the advanced countries, continues to drive international economic activity, although a turning point seems to have been passed. In Italy, after the acceleration of growth recorded in the second quarter (+2.7 per cent), the economy continued on the same path in the third quarter as well, although – according to the PBO’s short-term forecasting models – GDP growth was slightly slower.

Global economy beyond its peak – Although still indicating an expansion, the confidence indices of purchasing managers (PMI) show signs of a slight slowdown, largely determined by problems in the supply of goods and the lengthening of delivery times. Despite a modest recovery in September, the global composite index is 5.5 points below its May peak (Figure 1). Economic activity is marginally more robust in the advanced countries (53.8) than in the developing countries (52.3), while at the sectoral level manufacturing (54.1) appears to be performing slightly better than services (53.4). 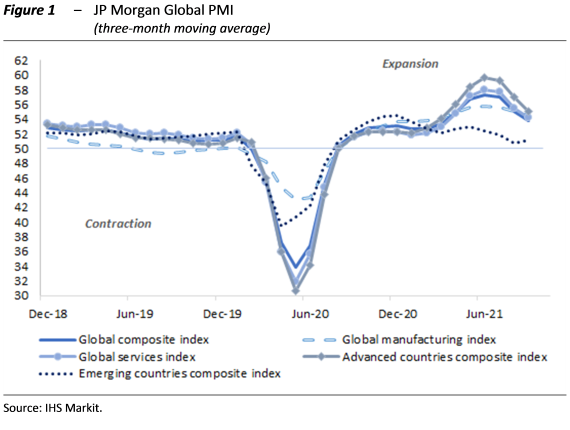 After recording an all-time high last March, world trade has begun to decelerate, mainly due to bottlenecks in global supply chains. The scarcity and high cost of containers and merchant vessels for outbound routes from Asia, the temporary blockage of the Suez Canal in March and subsequent port closures in China due to COVID outbreaks, as well as anti-COVID procedures that slowed the unloading of goods, have created bottlenecks in the supply of raw materials and semi-finished products. On 11 October, the International Monetary Fund (IMF) substantially confirmed its July forecasts for world GDP growth, with improvements for the euro area and downward revisions for the United States. For 2022, the changes were smaller, with the overall world economy expected to expand by 4.9 per cent. Bottlenecks in supply chains are causing imbalances between supply and demand and, consequently, increases in prices, in particular those of raw materials and transport, which in the future could slow the recovery of activity. However, the IMF considers these imbalances to be transitory, believing that they should normalise over the course of 2022. Nevertheless, this expected path to normality is affected by considerable uncertainty.

A surge in commodity prices and the potential risks for the economy – The rebound in economic activity has led to a sharp increase in demand for energy and non-energy commodities and for semi-finished products. The expansion of supply has been less robust, due both to pricing strategies, such as that adopted by OPEC for oil, and to the logistical bottlenecks noted earlier. The increases in the price of inputs have gradually begun to be passed on to consumer prices, which began to rise significantly last spring. More recently, the imbalance between the supply of and demand for goods have been accompanied by an increase in the price of CO2 emission rights within the European Emission Trading System (EU ETS) market, partly in response to the new European emissions reduction objectives connected with the European Green Deal and the Recovery and Resilience Facility, almost doubling since the beginning of the year (Figure 2). 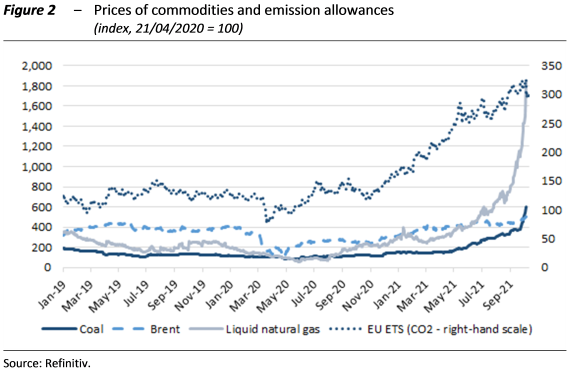 The effects of various alternative scenarios to the baseline for developments in commodity prices have been simulated with the aid of the Oxford Economics GEM (Global Economic Model) macroeconomic model. The simulations show that if commodity prices remained high for a long time, there would be significant impacts on inflation in the coming years. If prices were to stabilise at values higher than the peaks already observed, the effects on economic activity would also begin to be non-negligible. Developments not only in oil prices but also in those of commodities will therefore be crucial, as the transmission channels differ across the different geographical areas.

Italy, full steam ahead – In Italy, the easing of measures imposed to combat the pandemic fostered a rapid acceleration of GDP in the spring (2.7 per cent with respect to the previous period), outpacing the average for the euro area. Households have partially drawn down the savings accumulated during the recession, and the services sector, which had been affected most severely by the pandemic, has rebounded. Value-added continued to grow both in industry, boosted in part by the strengthening of exports, and, especially, in construction. The contribution of inventories to growth has turned negative, meaning that demand has outstripped supply.

Output indicators point toward a continuation of the expansion in the second half of the year. The aggregate index of business confidence posted a sharp increase in the third quarter compared with the April-June average, consolidating the expansion that began in the second half of last year. According to the PBO index, the uncertainty of households and firms gradually subsided over the course of the year, especially in manufacturing and services. The signs of economic recovery are confirmed by the timeliest quantitative variables: in July-September, electricity consumption and the consumption of gas for industrial use were virtually in line with the levels observed prior to the outbreak of the health emergency. In August, passenger air traffic increased for the fifth consecutive month, although it remained below the level registered prior to the pandemic.

In the second half of this year, economic activity is expected to continue the recovery begun in the spring, approaching pre-COVID values. Based on the short-term models of the PBO, in the third quarter, GDP is forecast to have grown by 2.6 per cent compared with the previous three months, albeit with an extremely large range of variability (from a low of 2.1 to a high of 3.1 per cent; Figure 3). The uncertainty of the estimates is very high, mainly due to the lack of reliable real-time indicators for the services sector. In the final part of the year, the positive impulse from the easing of the restrictions imposed in response to the health emergency will dissipate, meaning that GDP growth on the previous period would be around 1 percentage point. The short-term projections are exposed to balanced risks, while in the coming years those on the downside will continue to predominate, as already reported on the occasion of the endorsement exercise for the macroeconomic scenario of the Update to the 2021 Economic and Financial Document. 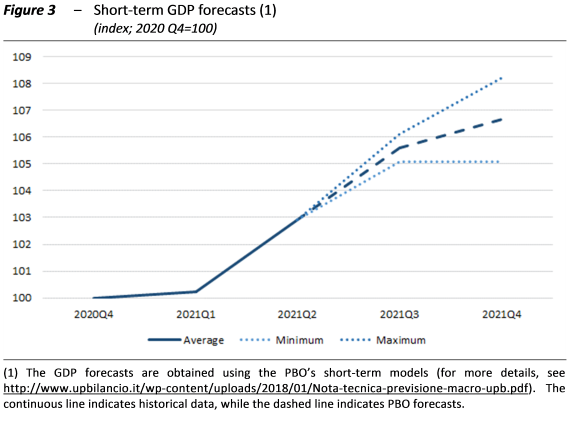 The labour market is normalising – In the second quarter, labour inputs registered a substantial increase, driven by the strong expansion of GDP. Employment growth slowed down in the summer, especially the female component. Nevertheless, in July-August as a whole, the overall number of persons in employment showed gains (0.4 per cent compared with the previous three months), thanks to the strong statistical carry-over. The use of wage supplementation programmes has declined significantly. The number of hours of wage supplementation (CIG) authorised in the second quarter decreased by 8.1 per cent, compared to the previous three months, and the decline also continued in July and August.

The strengthening of economic activity in the second quarter fostered a decline in the number of inactive individuals (-2.4 per cent) and an increase in the labour supply. The unemployment rate, which had fluctuated around 10 per cent since the summer of last year, was just below this threshold (at 9.8 per cent) thanks to a greater increase in employment than that in the labour force. The degree of under-use of labour edged down to 23.3 per cent. The decline in the unemployment rate continued in July-August (to 9.3 per cent on average), reflecting favourable developments in the employment rate (58.2 per cent, 0.3 percentage points higher than in the second quarter), while there was no change in the activity rate (64.3 per cent).

With the easing of restrictions on economic activity and layoffs, the unemployment rate has begun to regain its power to signal conditions in the labour market. Labour demand was simultaneously reactivated, while the vacancy rate in the second quarter was at the highest levels since the beginning of the time series.

In the early quarters of 2020, the unemployment rate had lost its informative capacity, as the contraction in the number of jobs was more than offset by the growth in non-participation. With the lifting of anti-COVID restrictions, the curve describing the relationship between unemployment and vacancies (the Beveridge curve) suddenly jumped upwards to very high values in the spring of this year, signalling possible imbalances in the matching of the demand for and supply of labour. Based on the position of the curve over the past decade, an unemployment rate of 9.8 percent should have been associated with a lower vacancy rate than that recorded in the second quarter (equal to 1.4 per cent). According to surveys of manufacturing firms, however, the availability of labour is not currently a major obstacle to production, as it is in other European countries.