Publication of the Report on Recent Economic Developments for August 2020

The global economy appears to be suspended between still partial signs of recovery, differing from country to country, and substantial risks associated with a possible second wave of the coronavirus. The August Report on Recent Economic Developments uses the most recent available indicators to analyse macroeconomic developments in the unprecedented recession, both at the international level and in Italy. Italy was one of the first in Europe to be hit by the COVID-19 pandemic and is now struggling with a difficult recovery. The Report also provides an update of the medium-term forecasts for the macroeconomic scenario and the public finances, even though surrounded by extreme uncertainty.

The global economy poised between recession, tentative recovery and the dangers of a new wave of contagion –After around seven months from the outbreak of the pandemic, leading indicators suggest that the global economy is heading towards recovery. However the upturn appears mixed, with some countries in which the virus is still spreading at an exponential rate and others where the peak has long since passed but the risk of a second wave remains high. After plunging well below 50 (the dividing line between the zone indicating a contraction and that indicating an expansion) in April, the global purchasing managers’ confidence indices (PMIs) began to reverse course in May and June (Figure 1). Gross domestic product returned to growth in China already in the second quarter, while in the United States and Europe, where the epidemic spread with a lag, the second quarter was the hardest hit, with quarter-on-quarter contractions in GDP of 9.5 per cent and 12.1 per cent respectively. 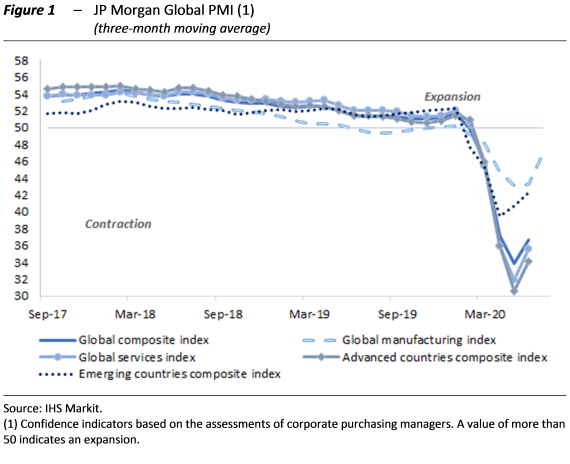 In the June update of the World Economic Outlook, the IMF again lowered its April forecasts, which had already delineated a global recession unprecedented in time of peace: world GDP would be set to contract by 4.9 per cent (a deterioration of 1.9 percentage points compared with the April estimates). The advanced economies are expected to see output decrease by 8.0 per cent, while the emerging markets would post a fall of 3.0 per cent. The forecasts for world trade are even more pessimistic, as they point to a contraction of 11.9 per cent.

The Italian economy collapses in the second quarter, in line with the euro area. – After a first quarter already marked by a steep decline (-5,4 per cent on the previous three months), the flash estimates published by Istat on 31 July show Italian GDP contracting by more than twice that in the second quarter: -12.4 per cent on the previous quarter; -17.4 on the corresponding period of 2019. The contraction of the Italian economy is almost in line with that of the euro area (-12.1 per cent; Figure 2), compared with a smaller decline in Germany (-10.1 per cent) and a larger one in France (-13.8 per cent) and Spain (-18.5 per cent). 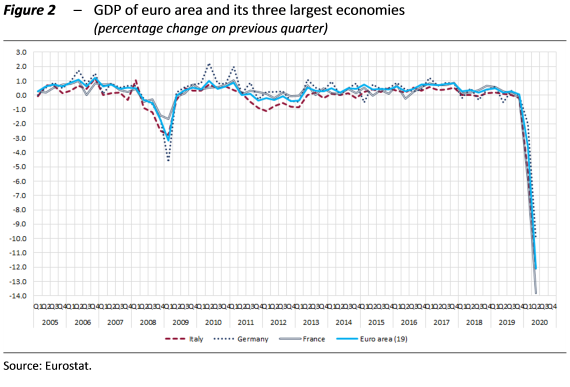 In Italy, the contraction in economic activity reflected the loss of production in all major sectors. On the demand side, the negative contribution of net exports is likely to have been smaller than that of the national component (before inventories). The decrease in Italy’s GDP already acquired for 2020 is 14.3 per cent.

Industrial production, after two unprecedented contractions in March and April (respectively 20.5 per cent and 28.4 per cent on the previous period), decisively reversed the trend with the reopening of the economy in May (with an increase of 42.1 per cent compared with April), but the level of activity is still about a fifth lower than the corresponding level in 2019. Similarly activity in construction more than doubled in May (up 168.0 per cent on the previous period), but remained more than a fifth lower than in the same period of 2019. The PMI for the manufacturing sector rose to 51.9 in July (from 47.5 in June), consolidating the recovery from the historic low registered in April (31.1). The Istat index of manufacturing confidence also rose in July, reflecting the improvement in all the components of the aggregate indicator, continuing the recovery that began the previous month.

The recovery is uneven and shadowed by much uncertainty. – The available indicators appear to confirm that recovery is under way after the lows recorded in April, even though it is partial and unevenly distributed among sectors. The consumption of gas for industrial uses in June increased for the second consecutive month, but remains almost fifteen percentage points lower than in the same month of 2019, with a similar pattern in electricity consumption. Car registrations, after having almost disappeared during the lockdown, recovered in May and June but are still far from their pre-pandemic levels (-23.1 per cent in June compared with the same month in 2019).

Overall, the third quarter should mark a turning point in the cycle, although not yet sufficient to normalise economic activity to the values registered prior to the pandemic. The uncertainty of households and firms and the cautious stance of expectations for income and profitability are a burden, although the economic policy measures already deployed and those still being defined are a positive factor.

Macroeconomic forecasts and possible risks. ‒ The macroeconomic forecasts for the Italian economy update, for the years 2020-2021, the scenario prepared by the PBO in April on the occasion of the endorsement exercise for the forecasts contained in the 2020 EFD. In formulating the projections, account was taken of new data for the international exogenous variables and the most recent information on economic conditions, in particular second quarter GDP. With regard to fiscal policy, the forecasts take account of the measures already adopted with Decree Laws 18, 23 and 34 of 2020 (including the elimination of the indirect tax increases provided for in the safeguard clauses) as well as the budget deviation authorised in Parliament, although the measures for which the authority will be used have not yet been specified by the Government.

The forecasts for 2020 come against the background of the exceptional contraction in GDP in the second quarter, which followed the decrease already registered in the first three months. According to the PBO’s short-term forecasting models, economic activity is expected to return to growth in the second half of the year, but the timing and intensity of that upturn remain highly uncertain. Overall, GDP is forecast to decrease by 10.4 per cent this year (Table 1). The impact of the recession was significantly mitigated by fiscal policy, which supported GDP with measures worth around 2.5 percentage points. In 2021, economic activity will rebound, benefiting primarily from the statistical carry-over impact of the recovery in the second half of this year. However, the expected 5.6 per cent increase in GDP will not be sufficient to return output to a level close to that recorded before the start of the pandemic. The level of gross domestic product will be about five percentage points lower than in 2019 (in both real and nominal terms). 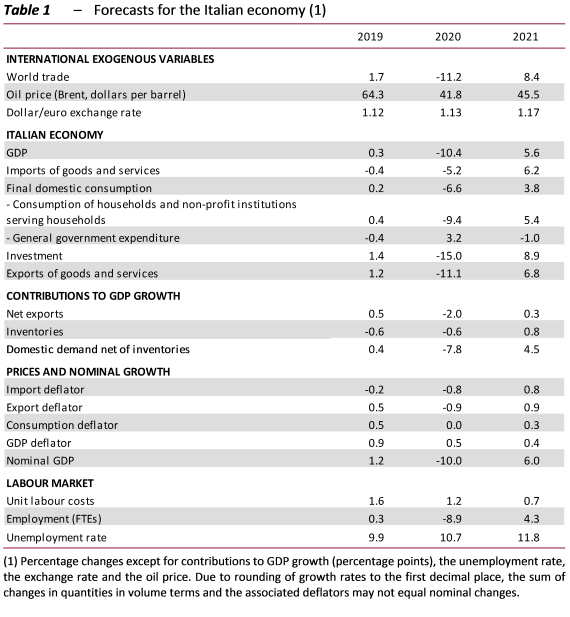 The forecast scenario presented in this Report signals a gradual but definitive recovery in economic activity, and therefore rules out the possibility of a second wave of contagion that would make it necessary to implement new measures to restrict movement. The expansionary economic and monetary policy measures are also assumed to be fully effective in limiting sovereign debt yields and sustaining the liquidity of firms and the disposable income of households. Any failure of one of these conditions to obtain would represent a non-negligible downside risk to the forecast. Regardless of the assumptions adopted, the medium-term outlook is affected by extraordinarily high uncertainty, with risks mainly oriented downwards both for the international scenario and for financial balances. A further weakening of international economic conditions connected with the spread of pandemic cannot be ruled out. Furthermore, even when the virus will be controlled and the world economy will return to a stable growth path, any differences between the cyclical phases of the various European countries could interact with the normalisation of economic policy, affecting the sovereign risk premiums demanded for economies which are lagging behind. If this were to involve Italy, whose large stock of debt was further increased by the crisis, financial tensions could be reflected in a sudden deterioration in growth expectations.

The legacy of COVID-19 for the public finances. – In consideration of the exceptional situation created with the health emergency and its significant effects on the public accounts, preliminary forecasts for the public finances are included in this edition of the Report. The forecasts reflect the effects of the decree laws already introduced and take account of the limited information available on the measures that may be funded with the additional budget deviation recently approved by Parliament. These forecasts are inevitably affected by the great uncertainty about future developments in international and national macroeconomic conditions, bearing in mind the significant risk factors that could significantly influence their evolution.

Given the economic environment delineated here and considering the measures taken to counter the emergency, including the deviation requested by the Government with its July Report to Parliament, the public accounts will worsen considerably this year before partially recovering in 2021. After the 1.6 per cent of GDP recorded in 2019, general government net borrowing would be around 13 per cent, before narrowing by almost half next year. After having stabilised the debt to GDP ratio at 134.8 per cent in 2019, the ratio is expected to rise to over 160 per cent in 2020 before declining slightly in 2021 thanks to the resumption of GDP growth, but it would still remain above 160 per cent.

The upside and downside risks to the public finance forecast appear equally probable: the former are linked to the performance of the economy – as noted earlier – and certain financial transactions, while the latter are connected with possible savings compared with the information in the Technical Reports accompanying the decrees already implemented, as in the case of fewer-than-expected applications for advances from local governments for the payment of outstanding debts or less-than-expected recourse to wage supplementation support.