Publication of the Report on Recent Economic Developments for February 2020

The sharp and unexpected slowdown registered by the Italian economy in the last part of 2019 projects its negative effects onto the outlook for the current year. According to the Report on Recent Economic Developments for February, which updates the medium-term forecasts for Italy, growth is expected to remain modest, hampered by the weakness of the international economy and exposed to widespread uncertainty. Several risk factors, old and new, are also present.

The global economy between signs of a trade ceasefire and the coronavirus effect – Last year experienced a significant slowdown in world economic growth, which registered its slowest pace in the entire decade (2.9 per cent). The effects of the partial easing of trade tensions between the US and China are not yet reflected in the most recent data available on developments in world trade (Figure 1), while the International Monetary Fund has again revised downwards (for the sixth consecutive time) its forecasts for this year and next. Among other things, those forecasts were produced before a clearer indication of the precise extent of the coronavirus epidemic that broke out in China. According to still preliminary estimates, the economic impact of the outbreak on world GDP could be at least a couple of tenths of a percentage point already in the first quarter. 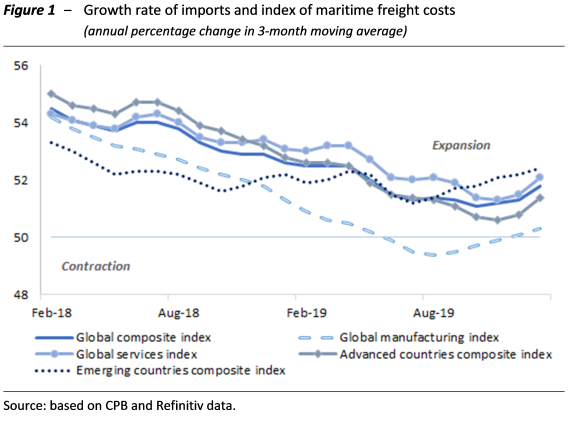 The legacy of the autumn freeze in Italy – While in the first three quarters of last year the Italian economy recorded barely positive economic growth, in the last quarter, Istat’s preliminary estimates show a sharp unexpected contraction (-0.3 per cent on the previous period). This setback ‑ although experienced to differing extents in the rest of the euro area (Figure 2) and attributable to contractions in industry, construction and agriculture ‑ did not so much impact the results for 2019, which closed with GDP growth of 0.2 per cent (0.8 per cent in 2018), as it did the legacy left for the current year: the statistical carry-over effect is expected to be a negative 0.2 percentage points. 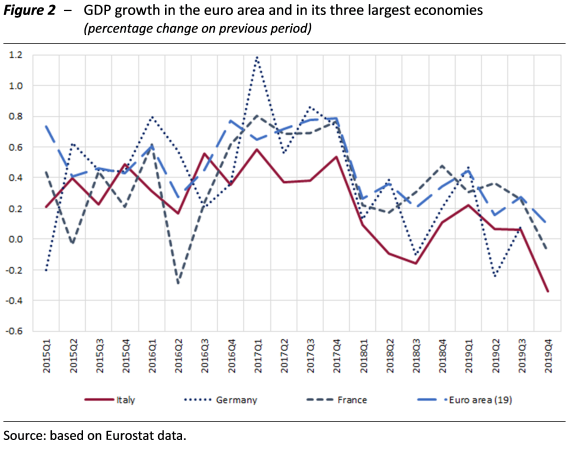 The most recent indicators do not appear to signal a change in the conditions. In the fourth quarter industrial production contracted very sharply (-1.4 per cent on the previous quarter), similar to developments in Germany. The uncertainty of households and firms continues to rise, as indicated by the PBO index of uncertainty, which while remaining below the peak registered in 2013-2014 continued to worsen in the final part of 2019, mainly reflecting the construction and manufacturing components. All composite economic indicators show economic activity stagnating.

Macroeconomic forecasts and possible risks ‒ The short-term forecasting models of the PBO find that GDP in the current quarter will not recover the sharp drop registered in the previous period. Economic activity is expected to revive in subsequent quarters, buoyed by the slow recovery in domestic demand, while net foreign demand is forecast to make a very small contribution. GDP is projected to grow by 0.2 per cent in 2020 (0.1 per cent adjusted for the number of working days).

The forecasting exercise differs from those conducted by the PBO for the purpose of endorsing the macroeconomic scenarios of the MEF, in order to make it more directly comparable with the scenarios developed by the main international and national organisations. In particular, the baseline forecast for 2021 does not include the increase in indirect taxes provided for in the safeguard clauses and does not consider alternative funding measures. Under these assumptions GDP is expected to expand by 0.7 per cent next year (Table 1). Activation of the safeguard clauses would subtract between one and three-tenths of a percentage point from GDP growth next year, depending on assumptions about the degree to which the VAT increase is passed on to prices.

The risks to which to the macroeconomic scenario is exposed are strongly tilted to the downside, potentially impacting international economic conditions and, consequently, the situation in Italy as well. The scenario considers the recent easing of trade restrictions and the orderly launch of Brexit but it does not reflect any new sources of geo-political instability (in particular in the Middle East), as well as environmental risks. Any adverse developments in these areas could accentuate volatility on the commodity and foreign exchange markets, with an impact on international growth, exports and investment in Italy. One specific risk concerns the economic effects of the coronavirus epidemic, which are not quantified in this scenario, as the information available is still too preliminary.

The forecasts also assume the maintenance of accommodative monetary and financial conditions by the central banks and the stabilisation of risk premiums on government securities. Conversely, any shocks in the financial markets would induce rapid increases in the yields of sovereign debt securities which, if persistent, would affect the spending plans of firms and households.