Publication of the Report on Recent Economic Developments for October 2020

The collapse registered in the first half of the year was followed by a strong rebound in economic activity, which nevertheless remains below pre-COVID-19 levels. Drawing on the most recent indicators, the October Report on Recent Economic Developments examines the recovery of the global and Italian economies, whose resilience appears to be characterized by a high degree of uncertainty and risks that are all the greater the larger are the repercussions of the second wave of the pandemic.

The international economy recovers but the pandemic is accelerating again – In addition to personal suffering – the loss of human lives has risen well above 1 million, and the number of people infected exceeds 40 million (Figure 1) – the crisis has also inflicted heavy losses on the economic system, with scars that could remain evident for a considerable time. 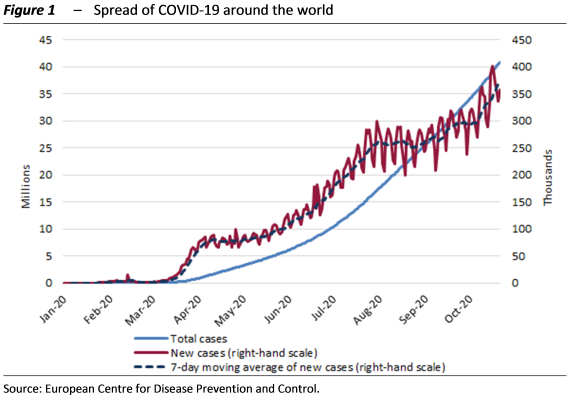 After the sharp contraction in economic activity in the first half of the year, the easing of social distancing measures led to a rebound in production in the summer quarter, although it was not sufficient to recoup the level of output registered at the end of 2019. At the beginning of the summer the Purchasing Managers’ Index (PMI) returned above 50, the threshold separating contraction and expansion.

World trade, which was severely impacted by the pandemic due both to the reduction in demand and the restrictions on trade imposed in the emergency, began to expand again. According to data from the Central Planning Bureau (CPB), in June and July the world trade index rose on a monthly basis (7.9 and 4.8 per cent respectively) after 5 months of contraction. Overall, in the first seven months of the year, trade contracted by 8.5 per cent compared with the same period of the previous year.

In its October Outlook, the International Monetary Fund (IMF) revised upwards its growth forecasts for 2020 for the first time. World GDP should contract by 4.4 per cent this year, an improvement of 8 tenths of a point compared with the June scenario (the revision reflects developments in the advanced countries, where the decline is now expected to amount to 5.8 per cent). For next year, however, forecasts for the rebound in world GDP growth (to 5.2 per cent) have been lowered slightly. Forecasts for the decline in trade have improved for this year (-10.4 per cent) and, albeit marginally, for 2021 as well.

Italy: an uneven and partial recovery – Real-time indicators used to assess current conditions foresee a recovery in economic activity in the third quarter, which is expected to be pronounced in manufacturing but coloured by greater uncertainty in services.

After the collapse registered during the lockdown, industrial production expanded rapidly in May (42.1 per cent) before moderating in the following three months (8.2, 7.4 and 7.7 per cent, respectively). In reflection of these dynamics, the level of activity in August returned to its 2019 average. The PMI for the manufacturing sector remained in expansionary territory in September (at 53.2), consolidating the recovery from the historic low recorded in April.

The impact of the health emergency on the services sector appears to be persistent. The restrictions imposed on the movement of people led to a collapse in the retail sector, which only partially recovered in the months following the lockdown. In the second quarter, turnover in services was down more than 70 per cent year-on-year for hotels and restaurants and by about one third for travel agencies and business services. At the end of September, passenger air traffic was over 70 per cent below the level of 2019, while motorway traffic, which had returned close to pre-pandemic levels at the beginning of August, gradually declined from September (Figure 2). Even the service industry segments that were not shuttered during the lockdown recorded heavy losses, as in the case of information technology and communications (-8.0 per cent). After having recorded historic lows in April (10.8), the sectoral PMI moved into expansionary territory in July (51.6) before slipping below the critical threshold of 50 in August and September. 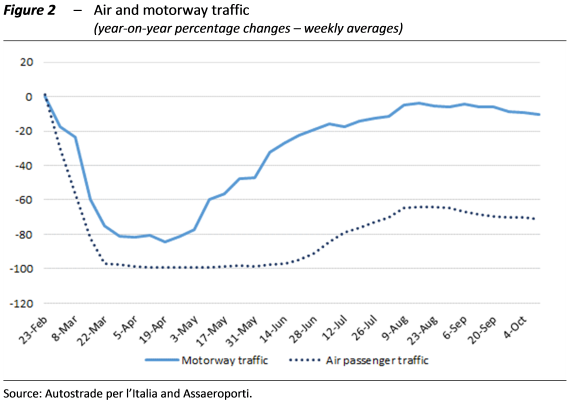 The future depends on the (not negligible) impact of the second wave – The uncertainty of households and firms as measured by the PBO indicator subsided in the summer, but remains very high in historical terms (Figure 3). This mainly reflects the deterioration in confidence in the market services and retail trade segments in the first half of the year.

According to the PBO’s short-term models, in the third quarter GDP is estimated to have jumped by about 12 per cent, although it would still be eight percentage points lower than pre-COVID values. The range of variability of these estimates is extremely high, extending a few percentage points above or below the mean. The uncertainty affecting the previous quarter is quite substantial, reflecting the lack of real-time indicators for the services sector, as well as possible revisions of the quarterly time series in the coming months. In the final part of the year, the positive impulse from the easing of the pandemic during the summer is expected to dissipate. The quarter-on-quarter change in GDP would be barely positive in the baseline scenario, which however does not consider the effects of the new wave of the pandemic. The outlook for growth of the Italian economy in the final part of the year, however, strongly depends on the evolution of the pandemic, which in recent weeks has begun to spread rapidly in Italy, lagging slightly behind developments in other European countries. 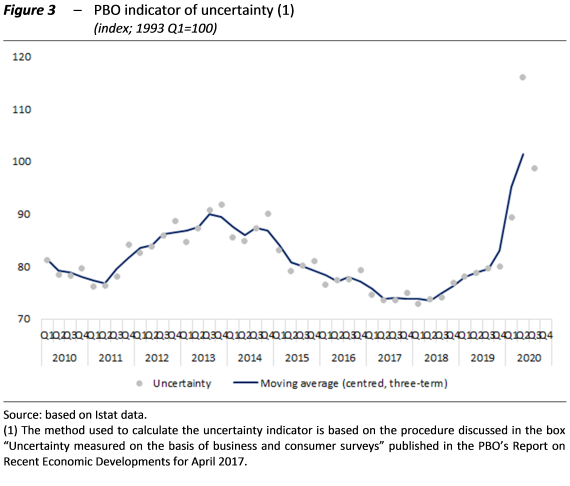 The macroeconomic impacts of a resurgence of the virus are extremely difficult to quantify. However, it is possible to use the experience of last spring to try to determine the order of magnitude of the effects on GDP. Projecting various alternative epidemiological scenarios and taking account of the historical statistical relationship with the restrictive measures adopted during the first wave, the negative effects on GDP in the fourth quarter would range from about three percentage points of GDP in a less unfavourable scenario to eight points in a more adverse scenario. The impact on the change in GDP for 2020 as a whole would be one or two percentage points, but the repercussions would be greater on the growth rate for 2021, as the fourth quarter has a stronger statistical impact on the following year. The exercise depends heavily on the assumptions formulated about the evolution of the pandemic, as well as on statistical relationships estimated on the basis of the few observations available for the first wave of the COVID pandemic. For these reasons, the findings should be interpreted with extreme caution.