The deceleration experienced by Italy during 2018 has left its mark. But after two quarters that had raised the spectre of recession, the Italian economy ‑ according to the April Report on recent economic developments – is displaying the early tentative signs of recovery. If and to what extent these signals, which are still clouded by considerable uncertainty, indicate a clear inversion of the economic cycle remains to be verified. Also because the legacy of 2018 seems destined to weigh on the outlook for economic growth, which is still weak in the short term.

From growth to recession ‒ Last year, Italian economic growth declined to 0.9 per cent, from 1.7 per cent in 2017. According to the recently updated annual accounts, the role of domestic demand in the slowdown was slightly greater than that of net foreign demand. The pace of growth declined during the year, becoming slightly negative in the third and fourth quarters. For the latter period, the quarterly national accounts published on 5 March estimated a decrease of 0.1 per cent on the previous period (from -0.2 indicated in the preliminary estimate at the end of January). Economic activity in the final part of 2018 was primarily slowed by inventory building (Figure 1). By contrast, slightly positive contributions came from domestic demand net of inventories and net foreign demand. 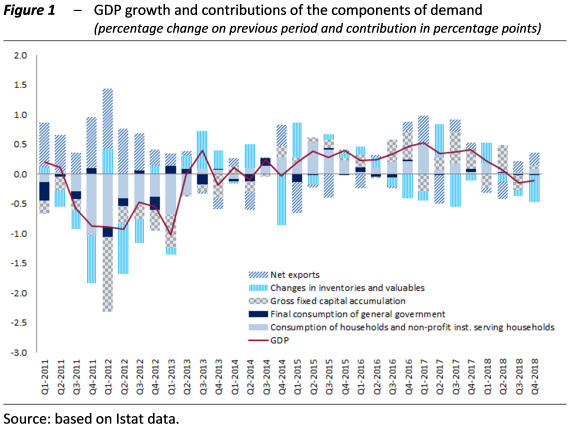 Consumption is resilient, investment weak ‒ After two quarters of stagnation, household consumption ‑ despite the reduction in household purchasing power, which led to a decline in the propensity to save to 7.6 per cent ‑ resumed growing in the fourth quarter (0.2 per cent on the previous period). Consumer confidence, which had already shown signs of deterioration in the last few months of 2018, worsened further last quarter. The less favourable climate of confidence, coupled with growing economic uncertainty, could negatively impact household purchases in the short term.

In the final part of 2018, the sharply erratic developments in investment eased, although it recovered only 0.3 per cent of the sharp decline registered in the summer. Survey data point to a continuation of weak capital accumulation in the short term. The Istat business confidence survey conducted in March showed a further deterioration in balance of assessments of domestic orders for capital goods in the first three months of this year. Assessments of lending conditions also deteriorated progressively during the year, especially for small businesses.

Output recovering but uncertainty prevails for households and firms ‒ Overall, household and business uncertainty continues to rise. Although still below the highs registered in 2013-2014, the PBO uncertainty indicator began to deteriorate from the end of 2018 (Figure 2), mainly driven by the construction and manufacturing sectors. 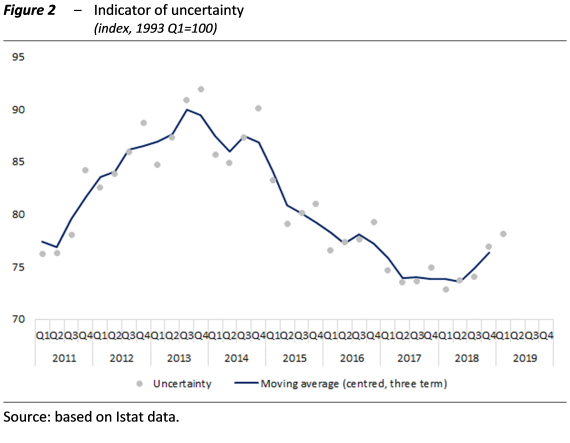 Industrial production, which had declined steadily between September and December, posted two consecutive increases on the previous period in the first two months of the year, returning to a level close to that recorded at the end of the summer. According to PBO estimates, output growth increased by about 1 percentage point compared with the October-December average.

A slow recovery retarded by many risks ‒ The current weakness of economic activity seems likely to continue and is also reflected in short-term forecasts, which show a slow recovery of economic activity in the early months of the year. In the first quarter, GDP is expected to have expanded by 0.1 per cent on the previous period (within a symmetrical confidence band of between 0.0 and 0.2 per cent. The corresponding year-on-year change is slightly negative; Figure 3), boosted mainly by the revival of manufacturing. In the current quarter, GDP is forecast to expand at a similar pace to the previous three months (with a slight improvement year-on-year), but with a greater degree of uncertainty. The forecasts are exposed to various risks. The international environment could be affected by new trade restrictions, as well as specific risks in China and the United Kingdom. The Italian economy also remains exposed to the volatility of yields on government securities.