After having already weakened in the past two years, the international economy has been overwhelmed by the COVID-19 pandemic. In the Report on Recent Economic Developments for April, we use the data currently available to analyse the initial effects of the shock that has impacted the world economy, albeit with differences in timing and intensity. This impact, the scale of which is highly uncertain, appears to many observers to be comparable in peacetime only to that of the Great Depression of 1929. Obviously, particular attention is given to Italy, the first European country to be affected by the pandemic, for which the PBO’s short-term forecasting models point to an exceptional decrease in economic activity in the first half of the year. In the first two quarters of the year, GDP is expected to contract by a total of about fifteen percentage points. Assuming that the pandemic recedes, activity would return to growth in the summer quarter. These estimates are affected by extremely high uncertainty, and therefore they must be interpreted with the utmost caution.

COVID–19 shock: economic activity and trade collapse, with a global recession on the way The moderate deceleration in economic activity, which had affected various economies in 2018 and 2019, appeared to have come to an end between the end of last year and the beginning of 2020 (Figure 1), thanks in part to the agreement to ease trade tensions between China and the United States signed in January. The spread of the coronavirus pandemic, first in China and then in the rest of the world, has radically changed the environment, triggering an unprecedented deterioration in economic activity and the outlook. 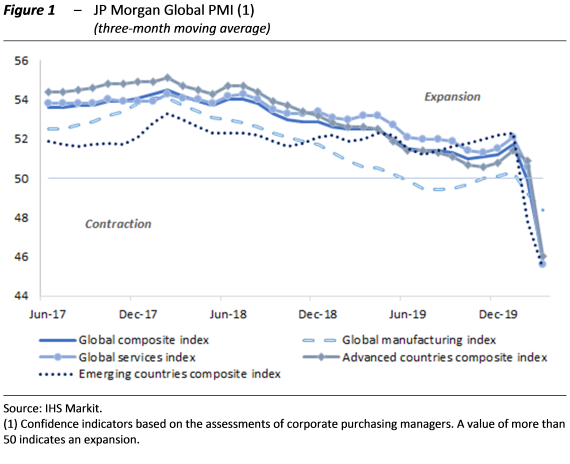 Globalisation and the close links between countries in global value chains have generated bottlenecks in the output of national goods that make significant use of imported intermediate inputs. The trade data available for February and March are still incomplete, but significant effects on the maritime freight rates indicated in the Baltic Dry Index can already be observed. The impact of the deterioration in the macroeconomic outlook on financial and oil markets has been rapid and pronounced.

The forecasts of the International Monetary Fund (IMF) released last week point to the deepest recession since the Great Depression, indicating for 2020 a contraction in the global economy of 3 per cent (6.3 percentage points lower than in January). GDP growth is expected to remain positive in China and India, but given the pace of population growth, GDP per capita would still decrease. For the advanced economies, the fall is expected to be 6 per cent, 7.7 percentage points lower than the forecast at the beginning of the year. Trade forecasts are even more pessimistic, anticipating an 11 per cent decrease, with a downwards revision of almost 14 percentage points compared with the January projections. In the countries most affected by the pandemic, monetary and tax authorities have adopted a range of countercyclical measures, the effectiveness of which will also be crucial for the recovery.

An unprecedented shock for Italy – Conditions in the Italian economy, which broadly stagnated last year, had already deteriorated in the last quarter of 2019. The rapid spread of the health emergency, starting from the end of February, has altered economic conditions with a speed and intensity unprecedented in peacetime. Household and business uncertainty continues to rise: the PBO uncertainty index deteriorated markedly in the first quarter of the year.

Due to differences in the timing of observations, the composite economic indicators developed by various institutions still only capture a partial picture of the effects of the pandemic on real activity. However, some signs of a sharp contraction in economic activity can already be inferred from high frequency variables, such as consumption of electricity and gas for industrial uses, which in March decreased by between ten and fifteen percentage points compared with the same month of 2019. At the same time, the closure of sales outlets essentially eliminated the car market, which registered an unprecedented year-on-year decrease in registrations (over 80 per cent; Figure 2). 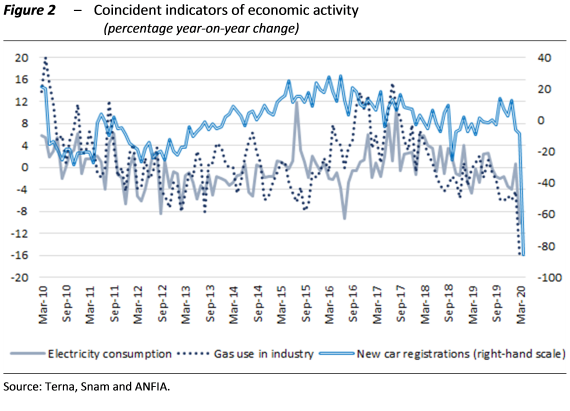 Short-term forecasts for the Italian economy ‑ Macroeconomic forecasting exercises are very complex in current conditions, as there is extreme uncertainty about when the pandemic will end. The PBO produces its short-term forecasts for Italian GDP growth using multiple mixed frequency models, which make optimal use of the information drawn from monthly economic indicators. Among these, the most important are so-called hard series, such as industrial production, which, however, are currently only available until February, i.e. before the coronavirus emergency had significant effects on the Italian economy. Nevertheless, the models also use more timely indicators such as those cited previously (Figure 2).

Taking account of these data, the first half of the year is expected to register a decline in economic activity of exceptional scale, unprecedented in the history of the Italian Republic. GDP is estimated to have fallen by around five percentage points in the past quarter, almost entirely attributable to the collapse of activity in March. The current quarter is more heavily affected by the effects of the lockdown, as it begins at very low levels and suffers from a negative statistical carry-over. Assuming that the restrictions are eased very gradually starting in May, a cyclical contraction for the second quarter GDP on the order of an additional ten percentage points is expected. The annual forecasts of the PBO, consistent with the forecasting horizon of the Economic and Financial Document (EFD) will be released on the occasion of the upcoming exercise for the endorsement of the Government’s policy macroeconomic scenario.

Employment slows and recourse to the Wage Supplementation Fund soars – At the moment there is no labour market information for the period of the health emergency, which could hinder the production of official statistics. According to Istat estimates, the measures to suspend or reduce production activities have affected 51.3 per cent of firms and 42.9 per cent of employees. According to the information released by INPS, applications for CIG (Cassa Integrazione Guadagni) support due to the COVID-19 emergency received through April 10 involved about 2.9 million workers, while applications for the ordinary allowance involved about 1.7 million beneficiaries. For CIG applications only, the total number of hours of wage support authorised may be well above – even triple ‑ the monthly maximum values observed since the financial crisis of 2009.

The unemployment rate, which stood at 9.7 per cent in the fourth quarter of 2019, was essentially unchanged at the start of this year. In the period covered by the health emergency, the drop in labour market participation has been accentuated by the social distancing measures introduced to contain the COVID-19 crisis, since reducing mobility makes active job search more expensive, thereby increasing discouragement. The growth in the inactive population could moderate the increase in the unemployment rate, although consumer expectations recorded in March (Figure 3) appear to signal a marked increase. 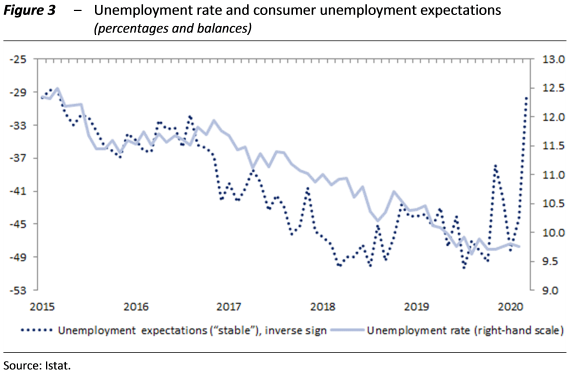