After the recessionary shock that marked 2020, the short-term economic outlook is closely intertwined with the evolution of the COVID-19 pandemic and the vaccination campaigns underway to combat it. The Report on Recent Economic Developments for April offers an account of the dynamics that characterized the final part of the last year and the economic developments that in recent months have affected the global and national economies, which struggling with a challenging phase of stabilisation after the largest contraction in GDP ever recorded in peacetime. The Italian economy is still suffering from the effects of the restrictions on mobility and economic activity introduced after last summer to contain the spread of the pandemic. However, according to the PBO’s short-term estimates, the decline in GDP recorded in the last quarter of 2020 was followed by substantial stabilisation in the first quarter of this year, albeit at a much lower level than that in the corresponding period of 2020.

The global economy sees the light at the end of the tunnel – Over the past two months, the spread of the coronavirus has decelerated slightly. This, together with the continuation of the vaccination campaign (Figure 1), albeit with frictions connected with the limited availability of shots in some countries, points to the advanced economies returning to levels of economic activity close to normal in the final part of this year. 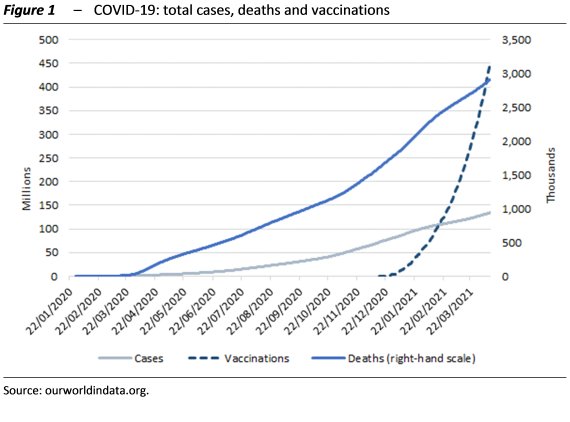 Since the beginning of 2021, purchasing manager confidence indices (PMI) have improved, signalling an expansion of economic activity. World trade has slowly begun to recover, resuming year-on-year growth last November. In its latest World Economic Outlook, the International Monetary Fund (IMF) made a substantial upward revision of its forecasts for world growth for this year: compared to those issued in January, the new forecasts point to a 0.5 percentage point acceleration in economic growth this year, bringing it to 6.0 per cent. The prospects for recovery differ significantly across countries and areas (GDP growth of 8.4 per cent in China and 6.4 per cent in the United States, compared with 4.4 per cent in the euro area), depending on the fiscal flexibility available to them, the supply of vaccines and the features of their economic structure, such as the importance of tourism, which was so heavily impacted by the pandemic.

Italy faces a steep bill for the second wave – The final quarterly accounts released at the beginning of March by Istat contained a slight upwards revision of the quarterly decline in GDP in the fourth quarter of last year (to -1.9 from -2.0 per cent in the flash estimate issued in February). The contraction in economic activity, which was more marked than that in the other major euro-area countries, reflected the restrictions imposed in the autumn to counter the second wave of the pandemic. On the demand side, both the domestic and foreign components negatively contributed to the change in GDP (Figure 2), reflecting more cautious spending behaviour on the part of households and a sharper slowdown in exports than in imports. Overall, in 2020, GDP contracted by 8.9 per cent, the largest drop ever recorded in peacetime. The contraction in gross fixed investment (-9.1 per cent) and national final consumption (-7.8 per cent) was accompanied by a larger decrease in exports of goods and services (-13.8 per cent) than in imports (-12.6 per cent).

The burden of the restrictions and the role of budget policy – Using the econometric models for short- and medium-term forecasts (MeMo-It), the PBO conducted an analysis of how the Italian economy would have performed if it had been a “normal” year. The historical developments were then compared with the projections formulated before the pandemic, in the autumn of 2019, on the occasion of the endorsement exercise conducted for the policy macroeconomic framework of the 2019 Update (GDP growth for 2020 was forecast at 0.5 per cent). In essence, it was estimated which factors could explain the difference (over nine percentage points) between the contraction in GDP in 2020 (8.9 percentage points) and the increase that was projected in the 2019 Update (0.5 percentage points). The assessments proposed must be considered with caution, since it is a necessarily simplified reading of history, being based on econometric models. On the basis of the exercise, it is estimated that the introduction of measures to contain the health emergency caused GDP to contract by over eight percentage points last year. Compounding this factor was the role played by international recessionary factors, which were also largely attributable to the pandemic, producing a deterioration of more than three percentage points in forecast growth. However, the impact on the economy of these recessionary factors was mitigated by economic policy measures and, at least initially, by a decline in oil prices. The fiscal policy response was exceptional, providing both resources to face the pandemic crisis and financial support to households and firms to limit the effects of the suspension of economic activity. It is estimated that it may have attenuated the recession by two and a half percentage points of GDP. 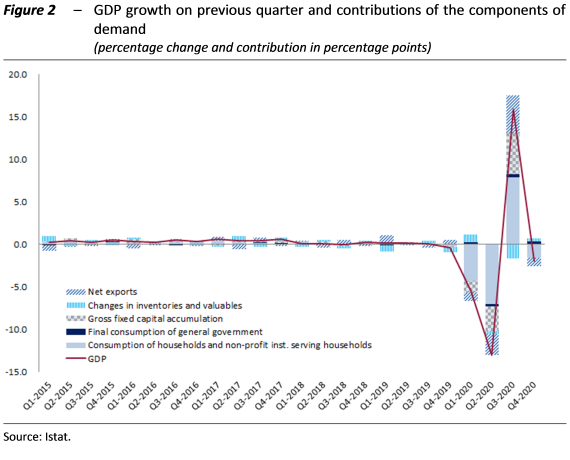 Small steps toward a challenging recovery – After stagnating in December, industrial production posted a month-on-month increase of 1.1 per cent in January, followed by a moderate rise in February (0.2 per cent). The acquired change in industrial output for the first quarter of the current year is positive, at about one percentage point. Business surveys point to favourable short-term developments: in March, the PMI for the manufacturing sector reached its highest level since January 2018 (59.8, up from 56.9 in February), driven by higher domestic and foreign orders. Istat’s confidence index for the sector increased for the second consecutive month, reaching 101.2, the highest level since July 2019.

The signs of a substantial stabilisation of economic activity were confirmed by developments in the timeliest monthly indicators: in March, the consumption of electricity and of gas for industrial use posted an increase compared with the previous month. By contrast, air passenger traffic registered a month-on-month contraction of about two percentage points in February. The composite indicators of economic conditions are consistent in signalling an improvement in the current cyclical phase.

The economy is still affected by the restrictions on mobility and productive activity imposed in response to the second and third waves of the pandemic. According to the PBO’s short-term models, GDP was virtually unchanged in the first quarter of 2021, more than 6 percentage points below its pre-COVID level. The range of uncertainty for these estimates is large, due to the lack of reliable and timely indicators for the services sector, which has been most affected by the health emergency. The mobility index appears to track the quarter-on-quarter developments in GDP in recent quarters. Observing the series also makes it clear that the dynamics of GDP are gradually improving more than mobility, so it seems that economic activity is progressively less affected by the restrictions on mobility (Figure 3). This phenomenon, which is also found in other countries, indicates that households and firms are trying to adapt to the health emergency by adopting alternative approaches to consumption, work and production compatible with the restrictions that have been imposed.