Thanks to the progress made in vaccination campaigns, the recovery of the world economy and trade has strengthened. According to the August Report on Recent Economic Developments, the speed and strength of the recovery appear to be closely related to the availability of vaccines and therefore the more developed areas such as the United States or Europe have benefitted the most. Here growth was stronger than expected in the second quarter of the year, especially in countries that, like Italy, had experienced a steeper decline in activity and which are now regaining ground faster than expected. According to PBO estimates the growth of the Italian economy in 2021 could be well above the forecasts produced a few months ago, reaching almost 6 per cent. In the first half of next year Italian output could return to pre-COVID-19 levels.

The recovery amidst vaccines and variants – During the spring, vaccination campaigns to combat COVID-19 registered a progressive acceleration, especially in Europe, China and North America (Figure 1). The spread of the disease has eased and restrictions on activities have been relaxed, allowing economies to recover. Since the beginning of the summer, however, with the slowdown in the administration of vaccines and the spread of the so-called Delta variant, which is highly contagious, the risks of new restrictions have increased, especially in countries that will not achieve herd immunity soon. 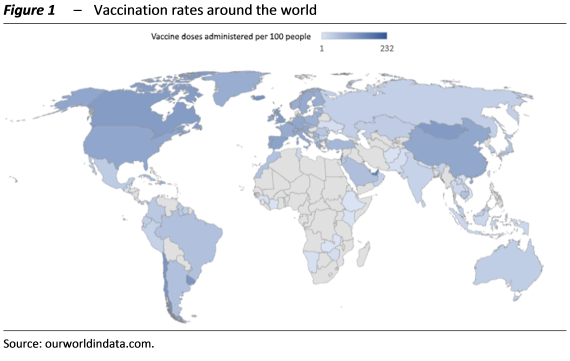 In June purchasing manager confidence indices (PMI) signalled an expansion of economic activity (56.6) for the eleventh consecutive month. In the United States GDP increased in the second quarter by 6.5 per cent on an annualised basis while in China it expanded by 7.9 per cent, a slightly faster rate than its pre-COVID pace. According to preliminary Eurostat estimates in the second quarter of this year euro-area GDP grew by 2.0 per cent compared with the previous period, exceeding expectations, especially in Italy, Spain and France.

On 27 July, the International Monetary Fund (IMF) updated its forecasts for this year and next, emphasising that access to vaccines underlies the division of countries into two blocks: on the one hand, the advanced countries, which have ready access to vaccines and are on course for normalisation, thanks in part to economic policies; and on the other, the emerging economies, which are lagging behind in their vaccination efforts and economic recovery, as well as being more exposed to the risk posed by variants. As for the signs of a recovery in inflation under the impetus of rising commodity prices, the IMF considers the underlying factors to be transitory, being associated with the pandemic and temporary imbalances between supply and demand, which should dissipate.

Italy accelerates on the road to recovery – After the contraction in the final part of 2020 and stabilisation over the winter, the Italian economy quickly embarked on a path of expansion, fostered by progress in the vaccination campaign and the gradual relaxation of restrictions on activities. Preliminary GDP data for the second quarter, released by Istat at the end of July, show a leap in economic activity (with growth of 2.7 per cent on the previous period and 17.3 per cent compared with the corresponding period of 2020). The growth of the Italian economy was faster than that for the euro area as a whole (2.0 per cent), thus enabling Italy to converge towards the other major continental economies with regard to the shortfall in output compared with the levels registered prior to the health emergency (Figure 2). The statistical carry-over impact on GDP growth for this year would be 4.8 percentage points. 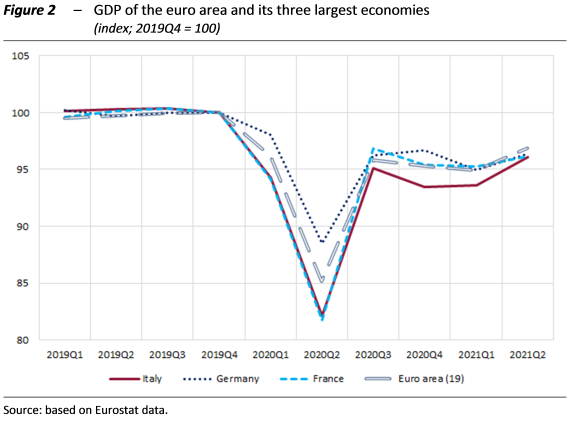 On the demand side, growth was fuelled both by net exports and, perhaps to a greater extent, by domestic spending (gross of inventories). After a quarterly decline in the first three months of this year (-1.2 per cent), household consumption showed signs of recovery in concomitance with the easing of restrictions, which boosted the components that had decreased the most in 2020. Based on PBO calculations, the quarterly rise in Confcommercio’s seasonally adjusted consumption indicator was about 2 percentage points (in volume terms). Although limited to April-May, signs of growth also came from retail sales. Consumer sentiment has progressively improved over the course of the year: the most recent surveys, for July, show further gains in the household confidence index (116.6, compared with 115.1 in June). The large stock of savings accumulated since the onset of the health emergency will support household demand, although the current resurgence of the pandemic threatens to postpone the recovery in private spending.

In the first quarter of the year, capital accumulation jumped by 3.7 per cent on the previous quarter. Surveys foreshadow a further strengthening of investment in the short term. The short-term outlook is based on the increase in domestic orders for capital goods since May and favourable lending conditions, albeit in an environment of uncertainty associated with the recent resurgence of the pandemic.

After contracting in May, PBO estimates indicate that activity in industry started to expand again in June: it increased by about 1 percentage point for the second quarter as a whole compared with the previous period, similar to that registered at the beginning of the year. For the second quarter as a whole, the aggregate index of business confidence, obtained as the weighted average of sectoral indices, increased compared with the January-March average, consolidating the recovery that got under way in the second half of 2020. According to the PBO index, the uncertainty of households and firms gradually subsided over the course of the year, especially in manufacturing and services.

Employment slow ahead – In the first quarter of this year, labour inputs fell slightly, virtually in line with the stagnation of GDP. The number of persons in employment contracted substantially (-1.1 per cent, a decline of 243,000 people based on the quarterly Labour Force Survey), reflecting the decline in permanent payroll employment and self-employment. By contrast, fixed-term employment expanded (0.6 per cent).

The number of job seekers began to rise again in the first quarter of this year (4.1 per cent over the previous period, or more than 100,000 people), while at the same time, however, the number of inactive individuals has increased. Continuing a trend under way since the third quarter of 2020, the unemployment rate continued to rise (to 10.4 per cent), as the decline in employment considerably outpaced the contraction in the labour force. This development reflected the extreme gradualness of the labour market adjustment process, characterised by considerable under-utilisation of the labour force (equal to about a quarter of the extended workforce based on Eurostat data; Figure 3), especially among people available to work but not seeking a job. In the second quarter, the improvement in the outlook for labour demand and less stringent constraints on individual mobility fostered a decline in unemployment, followed by a decline in non-participation. 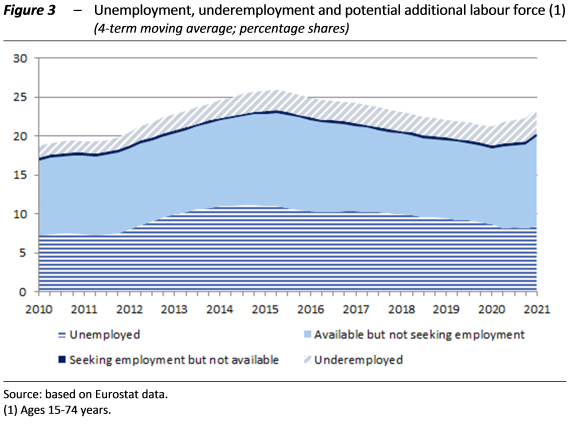 Growth strengthens in the medium term – In producing its forecasts, the PBO considered the most recent developments in the international exogenous variables and incorporated the most up-to-date information on economic conditions, in particular GDP growth in the second quarter. With regard to fiscal policy, the measures adopted previously with Decree Laws 59, 73 and 99 of 2021 are considered and the advances from the Development and Cohesion Fund (DCF) are taken into account. Finally, the forecasts also assume the full use of the resources available under the European NGEU programme in accordance with the measures outlined in the NRRP.

Following the strong quarterly increase in GDP in the second quarter, the PBO’s short-term forecasting models indicate that economic activity should continue to expand in the third quarter, although the pace of growth will slow to an extent that greatly depends on the scale of the resurgence of the pandemic. Overall, GDP is projected to increase by 5.8 per cent this year (Table 1). Economic activity will be sustained by domestic demand, which is still benefiting from an expansionary fiscal policy. In 2022, GDP growth is expected to slow down (to 4.2 per cent), but would continue to be driven by measures financed with the public budget and with European recovery plan funds. According to PBO estimates, the full and effective use of NGEU resources would raise GDP by about two percentage points by next year. In the first half of 2022, the Italian economy is expected to return to values close to those recorded before the pandemic. 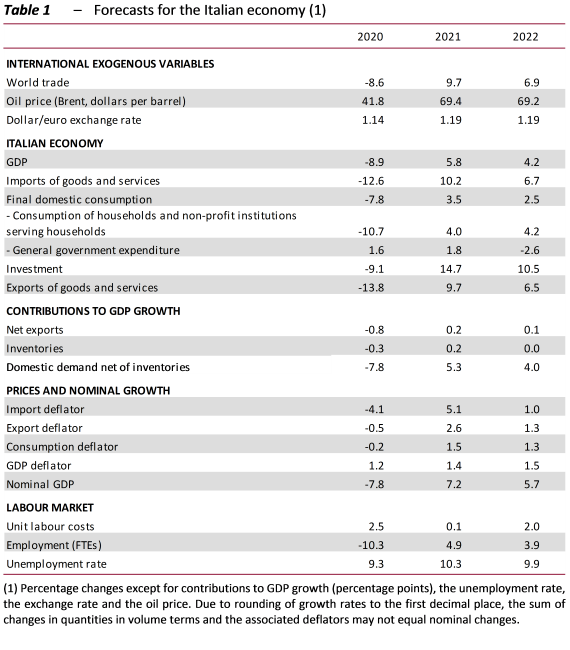 The PBO scenario – which is more optimistic than the predictions formulated by other forecasters before the release of the GDP figures for the second quarter – assumes that the upturn in the pandemic now under way will not be so severe as to require the imposition of significant restrictions over the forecast horizon, as the acceleration of the vaccination campaign should limit the pressure on hospital facilities. The projections also incorporate an assumption of the full use of European funds and the full implementation of the measures formulated in the NRRP. As regards monetary policy, the persistence of expansionary conditions in the euro area is assumed, with a small rise in sovereign debt yields and limited liquidity and insolvency risks for firms and households. In light of the considerable uncertainty about the evolution of the pandemic in Italy and abroad, the forecast scenario presented here remains exposed to bilateral risks, although they are mainly on the downside.